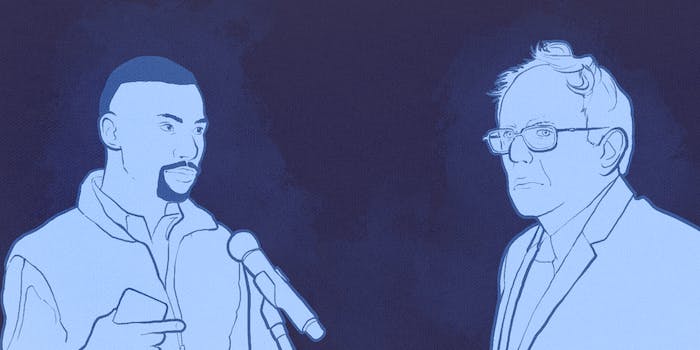 Four members of We The Protesters, Samuel Sinyangwe, Johnetta Elzie, Brittany Packnett, and DeRay Mckesson, who became famous as an organizer in the Ferguson, Mo. protests in 2014, talked with the Vermont senator about police violence, militarization, community empowerment, the wage and wealth gaps, and other issues.

“We spoke about other issues in terms of training of police and sort of broader strategies and messages that can really get the message out there of the urgency about race and racism in America and the fact that it needs to be confronted,” Sinyangwe told the Daily Dot.

Sanders admitted to lacking strong formal or public position on some major issues, but the meeting was to bring greater clarity around his positions, Sinyangwe said.

Sen. Sanders seems to be willing to learn, to better understand how to directly confront and address past and present racial inequities.

One major topic was the barriers for legalizing and decriminalizing marijuana, a popular topic for both Sanders and in the Twitter chat We The Protesters held before the meeting. The activists expressed particular concern over white people dominating the burgeoning legal marijuana industry and excluding economic opportunities for Black people due to laws disportionately impacting the latter.

“I think he indicated a willingness to learn and be pushed,” Sinyangwe said. “We had candid and frank conversations. There were areas where he admitted he hadn’t been speaking out enough about a particular issue and that he would think more about how to do that.”

We the Protesters recommended looking at Campaign Zero’s document, and comparing that to what Sanders has so far proposed in his platform.

“I think it’s important for candidates to listen to their constituents,” Sinyangwe said, adding that candidates need to propose solutions to issues directly impacting black people. “What is clear is that no candidate will win this election without the black vote.”