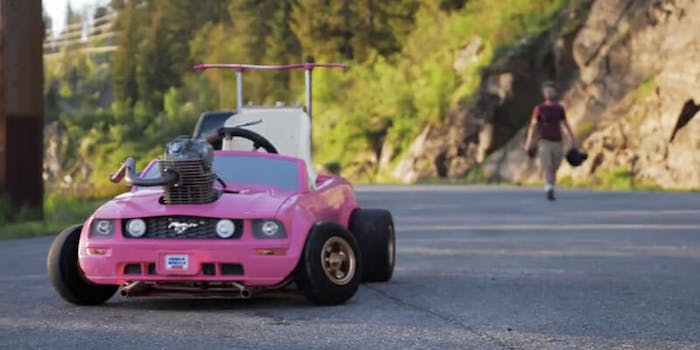 There are two types of people in the world: Those who were lucky enough to own a Power Wheels car growing up and those who are going to feel no qualms about dumping old mom and dad in the nursing home someday. (I kid! Mostly!)

But for those of us who were cheated out of an idyllic childhood happily zooming around our cul-de-sacs as fast as a 12-volt battery could take us, all hope may not be lost. The “mad geniuses” (as BroBible aptly calls them) at Grind Hard Plumbing Co on YouTube took an ordinary Power Wheels Barbie Mustang (retail price around $330) and tricked it out with a Honda 240cc single cylinder air-cooled four-stroke dirt bike engine.

And the result? They got that sucker to go up to 72 mph, hitting 60 mph in just six seconds, putting the driver’s life in serious jeopardy on two (two!!) separate occasions in the short clip. “We’re working out the kinks,” said the cameraman in the understatement of the year.

Presumably after having worked out said kinks and while speed-testing the Mustang, the YouTubers got challenged to a street race by a Honda Odyssey ATV go-kart.

Let’s just say it did not end well for the Odyssey.

If you’re wondering how they built the thing so you can recreate your own death trap at home and finally live out your childhood dreams, the Grind Hard dudes helpfully documented the four-day long process with a time-lapse video, with loose instructions in the video description.

Stay safe out there.