People are selling their Apple Watch preorders on eBay

Maybe you shouldn't sleep so much, you jerk!

The mad dash to get an Apple Watch started Friday night at 12:01am PST. When the dust settled about six hours later, people were looking at a wait of four to six weeks before their fancy new wearable arrived.

And you didn’t know any of this was happening because you were sleeping.

Don’t worry, just because you were tucked in tight come midnight doesn’t mean you’ll have to wait to get your wrist on an Apple Watch.

Some of the folks who made a point of being the first in line or the first to refresh at the right moment picked up their Apple Watch and got a second one just for you. All you have to do to get it is pay them a premium on eBay.

As is always the case with new technology, a fair share of the early adopters have no intention of actually using the device as anything other than a carrot dangling in front of a desperate face. The Apple Watch is already popping up on eBay with jacked-up prices and no physical product to show yet. If you purchase one of the current listings, you’ll really just be paying for the right to wait for your Apple Watch to arrive—an experience you could have had for free by setting an alarm last name.

The current markup on the eBay listings range from modest to absurd. The Apple Watch Sport is the most common listing. Retailing for $349, the digital scalpers have set the price at anywhere between $50 and $350—though most have the decency to offer free shipping because, you know, they aren’t monsters. 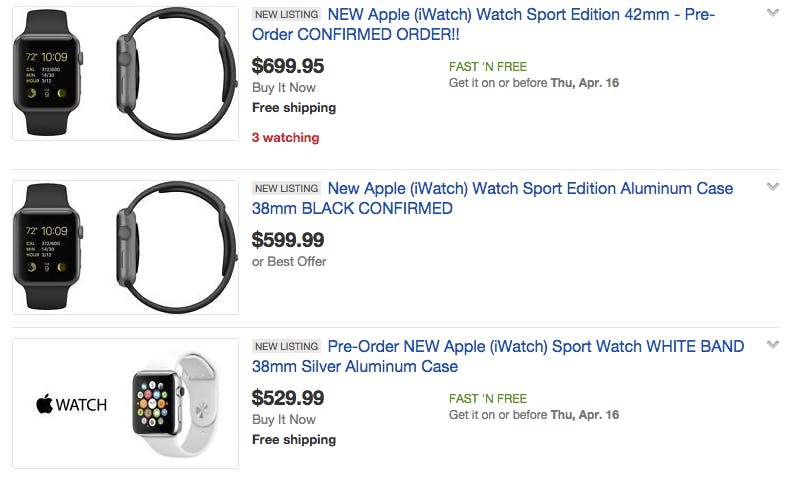 The higher-end models are harder to come by, probably because the upfront costs are considerably steeper and most of the people reselling just want to make a quick buck on a cheap investment. The few that are available come with an even bigger markup.

The Apple Watch stainless steel case and black leather band is priced at $699 from Apple, but you’ll be doubling that if you want it off of eBay—and the seller can’t even guarantee they’ll get it on launch day. The $999 stainless steel case with link bracelet that retails for $999 is price for $3,200 on eBay.

If you’re wondering if anyone was crazy enough to take a shot on the Apple Watch Edition: Yes, yes there are. The already plenty pricey (and difficult to find) Apple Watch with 18-karat yellow gold case and midnight blue strap goes for $15,000 from Apple or $19,995 over on eBay.

The Apple Watch Edition is not a rainy day purchase or the type of product you wake up in the morning and go, “Oh, right, totally forgot about that $12,000 watch I was going to buy.” You’re going to want to be on the ball for that type of thing. So sure, you can find some Apple Watch Edition listings for a bit cheaper, but at this point, why bother saving any money at all?

Of course, for as morally dubious as profiteering on preorders may be, it still beats the true jerks who post misleading listings with the intent of tricking people.

Take this listing for an “Apple Watch Space Black Stainless Steel Link Band” priced at $395—a reasonable enough price… if the actual Apple Watch was included. It’s not. The seller will send just the band, which you won’t get until June. Sadly, it already sold, so someone is probably going to be very upset come June.