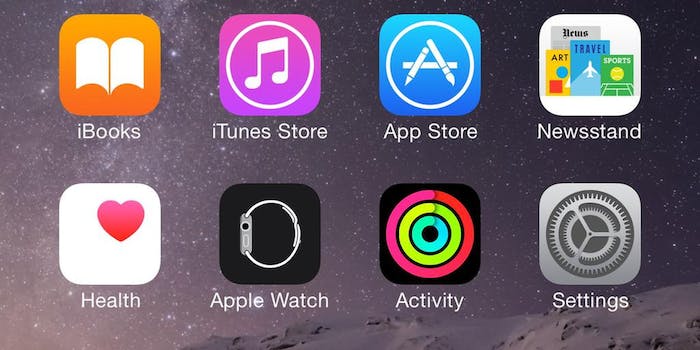 Apple hid a second Apple Watch app on your phone

Another Apple Watch app has been pre-installed in the latest iOS update.

Apple’s just-released iOS 8.2 update brought with it an Apple Watch companion app that a lot of iPhone users weren’t too happy about. The idea that an app was being forced upon them was bad enough, but the fact that it was promoting another Apple product made it too much to swallow. As it turns out, the update actually installed another app without telling you, but this one is invisible—at least for now.

Developer Hamza Sood discovered that a second Apple Watch app is hidden within iOS 8.2 and only becomes visible on your homescreen once you pair Apple’s new smartwatch with your phone. It’s called Activity, and it’s the one-stop fitness center for your workout history and fitness stats. The app has a built-in calendar to track workouts over time, details drawn from the pedometer on the Apple Watch, and even a huge list of “Achievements” that Apple Watch users can presumably earn for various fitness-related tasks and streaks. It’s a great-looking app and seems like it would be quite simple and straightforward to navigate, which is good news for anyone who plans on purchasing Apple’s upcoming wearable.

It’s quite interesting that Apple would choose to install the app with the 8.2 update rather than making it an App Store download prompted once you sync your Apple Watch for the first time. Pairing the Apple Watch and having the Activity app magically appear on your screen is definitely a plus for those who will be using it, but it’s presumptuous at this point. A fraction of iPhone users will be able to buy the watch, but their phones will have the app downloaded in the background anyway.

The good news is that apps like this (those without 3D graphics or resource intensive features) are typically very small in size, so chances are you’re not going to actually notice the app taking up much of your precious memory.