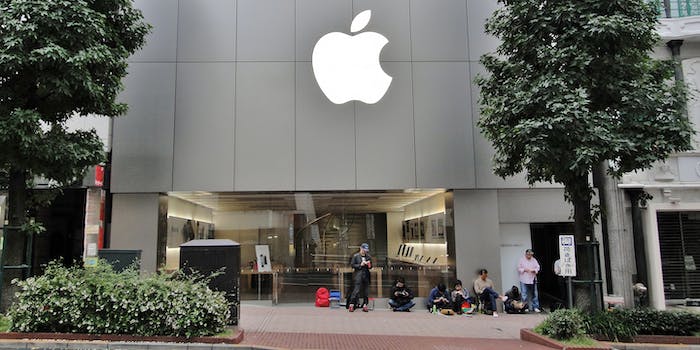 Mysterious grab bags are so perfect for the company.

Apple confirmed via its website that it would be returning its Lucky Bag sale at Japanese stores on Jan. 2, 2015.

The Lucky Bag promotion has run for several years, giving shoppers a random assortment of Apple goodies at a flat fee. The bags are priced at 36,000 yen (around $300) not including tax, but are guaranteed to yield a value equal to or greater than the price tag. Sometimes much greater—laptops and iPads have been in the mix in previous years.

According to Apple’s purchase policy for the Lucky Bags, customers are limited to one bag per person and the contents of the bundles are not returnable, refundable, or exchangeable unless defective. It also prohibits people from buying for the intentions of reselling the products, but there’s bound to be someone looking to turn a quick profit off the promotion. (Keep an eye on eBay starting Jan. 3.)

The promotion comes from the Japanese tradition of Fukubukuro, which means “lucky bag” or “mystery bag.” Many stores in Japan participate in the tradition, offering bags filled with goods to customers.

Being that Apple shrouds itself in mystery, it’s a fitting tradition for the company. And the bags have been a hit in previous years—people have camped out overnight for a shot at one of Apple’s mystery packs.

Last year, Apple offered up four types of  lucky bags. One contained a MacBook Air and the Beats Pill speaker, another was headlined by the iPad Air. Some aren’t as enticing as others, though—the main item in one of last year’s bags was an iPod Nano.

Previous years have offered up similar scores for shoppers willing to take the chance, and with a lineup of new mobile devices launched in 2014 and the Apple Watch around the corner, it seems like Japanese shoppers are as excited as ever.

The Lucky Bag sale starts at 8am on Jan. 2, 2015 at Apple retail stores in Japan and are available on a first-come-first-serve basis until stock runs out.