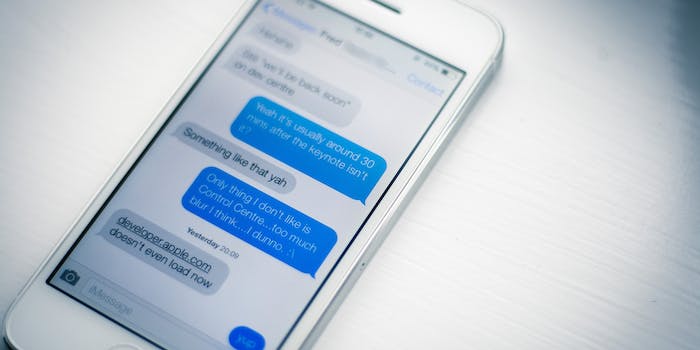 This solves one of Apple switchers' biggest complaints about the process of leaving the platform.

For years, people switching from an iPhone to an Android device have faced a serious problem: Text messages sent to their phone number often disappeared into the void, never to reach their Android phone, because their number was still registered with Apple’s iMessage service. In fact, Apple was sued for this for not a small amount of money. On Sunday, the company quietly released a solution to the problem.

Without any fanfare, the company created an easy online tool to let former iPhone owners deregister their number from its iMessage servers. The tool, spotted by the Verge, requires only that a user enter his or her phone number and confirm the short code that appears in a text message.

Judging by the reaction to this news on social media, the iPhone-to-Android text-message black hole was one of the most pernicious problems facing mobile OS switchers.

It’s about damn time they did something about this. iMessage can be a nightmare in all but optimal conditions https://t.co/g2FE5fCPJJ

Could have done with this 4 months ago! – Apple releases web tool to deregister phone numbers from iMessage. https://t.co/xQfbEUct6A

Thanks Apple for being 1,000 years late on having this tool available! https://t.co/npbRSBJoVm #RuntoAndroidNowButYoullBeBackPunksLoveYouTho

Apple finally released a tool to deregister your number from iMessage and be saved from the texting black hole! https://t.co/pfSjS462LT

This made my week. https://t.co/wiQetffNf3

Christmas just came early for everyone wanting to upgrade to Android https://t.co/4ZliUZ94dh

So iPhone owners, if you’ve been eyeing that Moto X, now might be the time to bite the Android bullet. After all, your biggest messaging woe has just been solved.