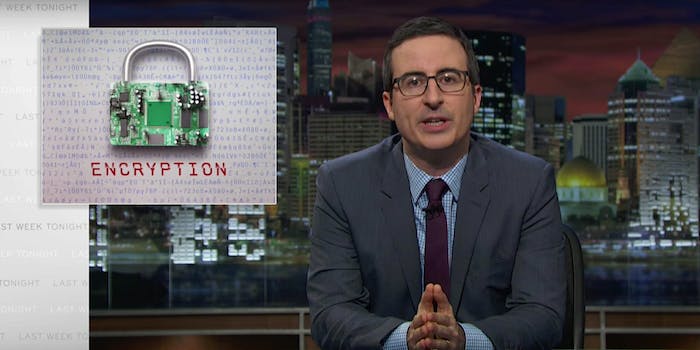 It goes far beyond one iPhone.

For most people, encryption means the security protecting their emails or bank accounts. But the debate over encryption—and the misinformation spread in the battle between Apple and the FBI over a dead terrorist’s iPhone—is a lot more complicated than you might realize.

Having previously talked to Edward Snowden about the NSA and government surveillance, John Oliver made the encryption debate accessible for the people who aren’t experts in a segment on Sunday night’s Last Week Tonight.

Forcing Apple to write software to help the FBI access the phone might give the government the information it needs, Oliver said. But critics believe that it could set a precedent for authorities to ask for even more dangerous code—something FBI Director James Comey admitted was possible—and weaken encryption for everyone.

As Apple fights to prevent the government from forcing it to write the code, CEO Tim Cook has become a new face of the encryption battle, and politicians and tech giants alike are choosing sides.

Oliver brought it all home with a fake Apple ad that illustrated what was at stake. Apple, the ad said, is barely one step ahead of hackers trying to steal personal information—and that’s without being asked to potentially compromise the safety of all of its customers.

It doesn’t exactly make for a fun commercial.