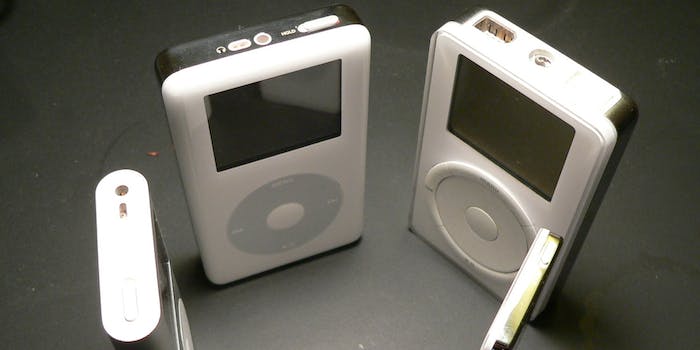 Apple's foray into digital music was bemoaned by many.

Today, Apple fans regard the iPod as a key to the company’s remarkable transformation in the early 2000s into the portable device powerhouse they are today. The day the iPod debuted, which was 14 year ago this week, not everyone was drinking the Apple Kool-Aid.

Many in the company’s fan base found themselves extremely disappointed, and some were even downright disgusted by the direction that then-CEO Steve Jobs seemed to be taking the company.

“I can’t believe this! All this hype for something so ridiculous!”

Most online news posts from the day the device was unveiled have long since been washed of their treasured comments sections, but as one Redditor discovered, the MacRumors forums are still intact—and full of hilarious gems.

Like a time capsule from late 2001, the comments in the threat titled “Apple’s New Thing (iPod)” are absolutely golden. We’ve gathered the best of the bunch below, so use them as a reminder that even if a new device or idea doesn’t seem like a worthwhile investment at first, it could very well the spark something much greater.

All that hype for an MP3 player? Break-thru digital device? The Reality Distiortion Field? is starting to warp Steve’s mind if he thinks for one second that this thing is gonna take off.

iPoop… iCry. I was so hoping for something more.

hey – heres an idea Apple – rather than enter the world of gimmicks and toys, why dont you spend a little more time sorting out your pathetically expensive and crap server line up?
or are you really aiming to become a glorified consumer gimmicks firm?

I still can’t believe this! All this hype for something so ridiculous! Who cares about an MP3 player? I want something new! I want them to think differently! Why oh why would they do this?! It’s so wrong! It’s so stupid!

There are already two products similar to this on the market. The Nomad Jukebox and the Archos Jukebox which can come with a 20 gig HD. The iPod is obviously alot cooler and has firewire, but it is far from revolutionary. I for one am disappointed and think that apple is making a mistake by trying to get into this market.

Here’s to another bullet in the foot…

Mmmm. APPL is already down $1.00…
Looks like the markets aren’t looking too favorably on Apple’s new forays into the digital device market.

It’s a shame that Apple doesn’t have market awareness and released that yet again, has “missed the boat” before spending R&D, time and money on creating this now-novel audio device.

Even amongst the shouting and doomsaying, some of the forum-goers who took time to comment on the thread were willing to give Apple credit for the compact size and other design achievements, though virtually nobody was willing to actually bet on it being a consumer success.

As it turns out, the first iPod was indeed slow-selling and more of a curiosity than a commercial hit, though its successors would eventually strike gold in the consumer music space and help bring Apple to the forefront of the gadget market.