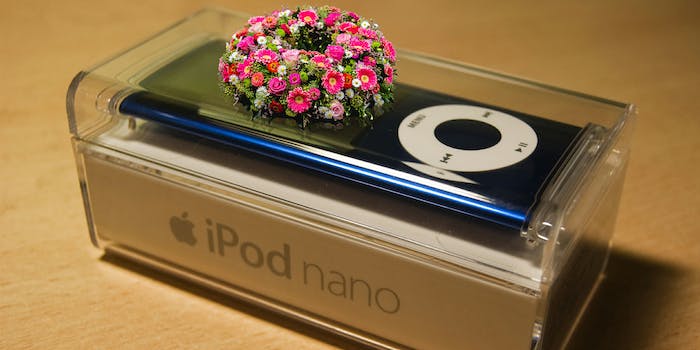 Released in 2005, the Nano and Shuffle were low-cost, ultra-portable versions of the now discontinued Classic.

Apple discontinued the iPod Nano and Shuffle, killing off the last remaining innocent iPods that couldn’t access the internet. The two devices were quietly removed from Apple’s online store on Thursday.

The only remaining iPod is the Touch, essentially an iPhone without calling.

“Today, we are simplifying our iPod lineup with two models of iPod touch now with double the capacity starting at just $199 and we are discontinuing the iPod shuffle and iPod nano,” an Apple spokesperson told Business Insider.

Apple’s decision to take the Nano and Shuffle off life support doesn’t come as a surprise. The Cupertino, California, giant last updated the Shuffle in 2010, while the Nano received a redesign and Bluetooth support in 2012.

The iPod and its MP3 format transformed the music industry, introducing many to the world of portable digital audio. It is widely credited for ending CDs’ 30-year reign as the top format for listening to music, but quickly became obsolete once the iPhone was released. Apple knew the iPod’s days were limited once it released its first-gen smartphone in 2007. It even named the music app “iPod” on early iPhone models.

At its peak, Apple sold a record-high 54.83 million portable music players in 2008. By 2014, it was only selling 14.38 million units. The company stopped reporting sales by the end of the year.

The Shuffle and Nano were two of Apple’s longest running and most popular iPod lines. The Nano was originally released as a pocketable version of the Classic. In 2005, Steve Jobs shocked the industry when he announced the Nano would replace the extremely popular Mini. Jobs is famously quoted for pointing to his jean’s watch pocket, and asking “ever wonder what this pocket is for?” before pulling out the Nano. The Nano was an instant success, and saw seven different versions in its 12 year history.

The Shuffle, also released in 2005, was a low-cost, ultra-portable option for people who didn’t need a touchscreen. It was marketed as the “most wearable iPod ever,” featuring a built-in belt clip. Unlike the Nano, the iPod Shuffle continued to sell units up until its end, and was an obvious choice for athletes and fitness gurus.

Apple is surprisingly shy about killing off its iPod products considering how important these long-running devices are to the history of the company. In 2014, Apple similarly took the iPod Classic off its site without any formal announcement.

The iPod Nano and iPod Shuffle are still available to purchase through online retailers if you’re looking for a new audio player, or would like to keep a few integral pieces of Apple history before they vanish.