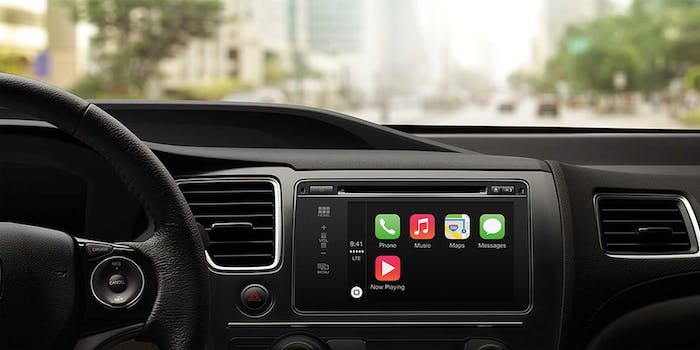 Apple patent shows the new feature for CarPlay is geo-fencing

Apple’s CarPlay and Google’s Android Auto are currently engaged in an infotainment arms race, each vying to make its way onto the dashboards and into hearts of drivers everywhere (while Ford inexplicably sees them both taking a backseat to its Sync system). With a slew of delays from automakers in rolling out CarPlay compatible cars, and Android Auto ready for a heavy rollout in early 2015, Apple is currently at a slight disadvantage. Traditionally, this is the point in the game at which Apple tends to unveil something very, very cool. And now they have.

A patent granted to Apple was published on Tuesday, and it sheds some light on the future of their CarPlay technology: geo-fencing. Conceptually, geo-fencing is simple: It’s a communication perimeter surrounding a vehicle’s CarPlay head unit, and that perimeter communicates with iOS enabled devices. This makes it possible to remote start a car’s engine, or lock and unlock its doors, using a phone, tablet, or watch (assumedly).

But that’s boring stuff that’s been around for decades, functions that are already offered on apps from various car security companies. What makes the new patent exciting, and what may really set CarPlay, is the idea of multiple geo-fences. This allows a mind-boggling number of potential uses, as each geo-fence is assigned a particular function that is activated when it’s breached. Is the driver within two feet of the trunk? Trunk unlocked. Is the driver sitting in the driver’s seat? Engine started. And so on.

Regardless of your feelings toward Apple, it’s hard to not get that certain “the future is now!” feeling when you imagine controlling your car without ever touching the keys. With the ability to personalize geo-fences and attach a car’s functions to each individual perimeter, you can remotely program everything from climate control to the audio system to activate as your mobile device gets within a certain distance of the car. Of course, you’d probably want to make sure to enable multiple security options on your mobile device.

Until 2015, you’ll only find CarPlay natively installed on a Ferrari. If you’re one of the unfortunate many who doesn’t own one of those, you can get a first look at CarPlay, (sans the multiple geo-fences… for now) on Pioneer’s NEX car receivers when they release their next firmware update.