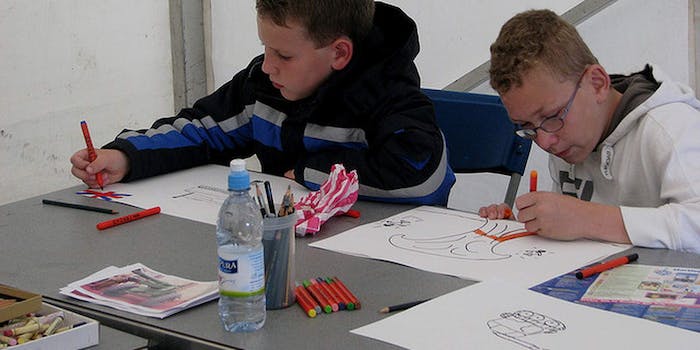 Teach your kids about terrorism with these anti-ISIS coloring books

‟These are not fun books.”

What do you get the six-year old who has everything, including passionate concerns about the threat of terrorism and the recent military success of Islamic State (ISIS) in capturing vast swaths of territory in Iraq and Syria?

One option is a newly re-released set of coloring books, released by St. Louis, Mo.-based publishing house Really Big Coloring Books, about the 9/11 attacks and terrorism, now with updated material about issues like ISIS, #Benghazi, and the release of former-P.O.W. Bowe Bergdahl.

The books are called The True Faces of Evil — Terror and We Shall Never Forget 9/11. 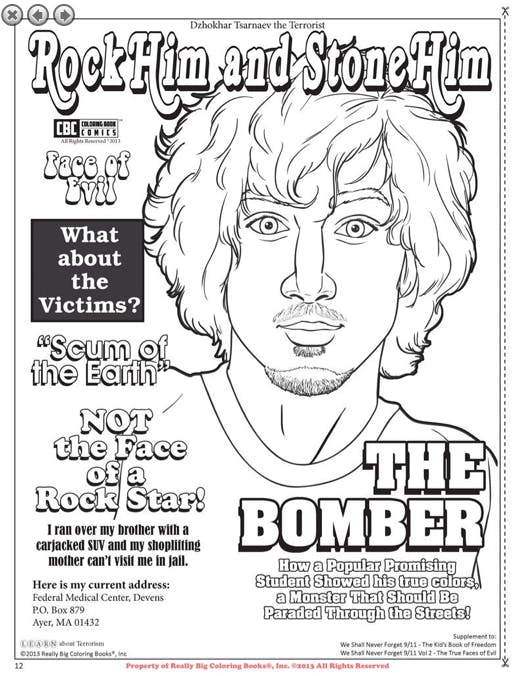 One detailing what happened to Osama bin Laden’s body after the terrorist leader was killed by U.S. military forces: 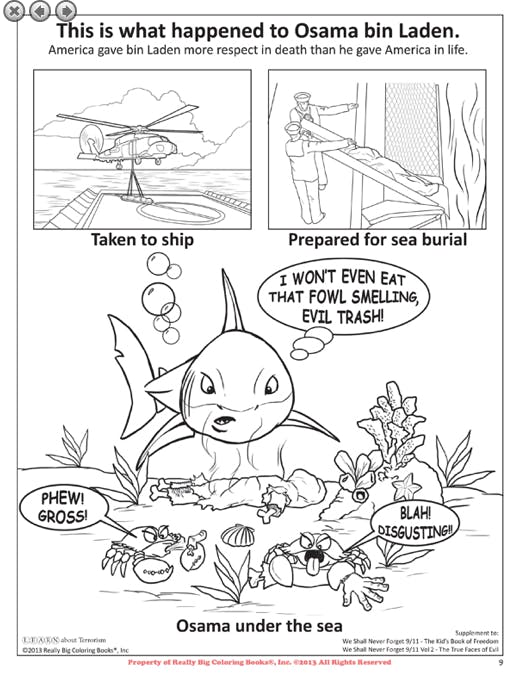 Pictures of the four people killed in the controversial attack on the U.S. embassy in Benghazi, Libya, that’s an implicit attack on the Obama Administration’s handling of the incident: 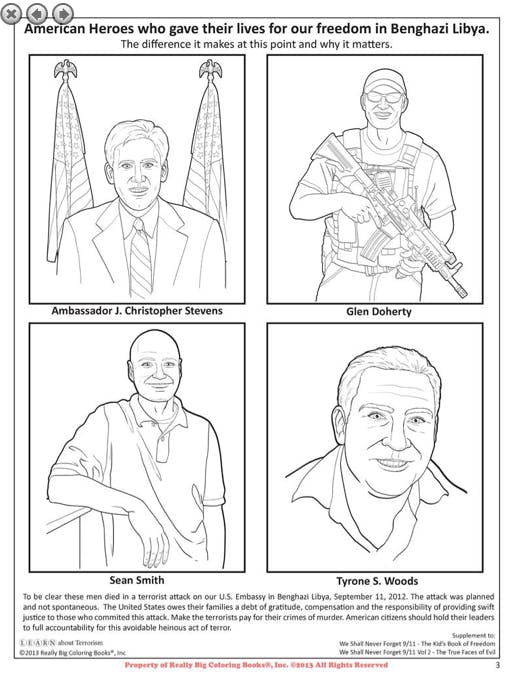 A drawing depicting how ISIS literally crucifies its religious and political opponents: 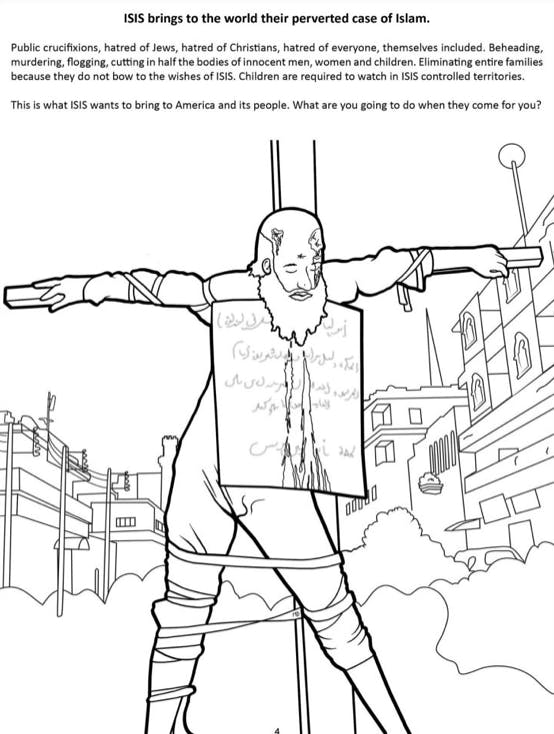 And another criticizing the Obama for trading five Taliban officials in exchange for the release of captured Sgt. Bowe Berghdal. Kids can totally make their beards pink!: 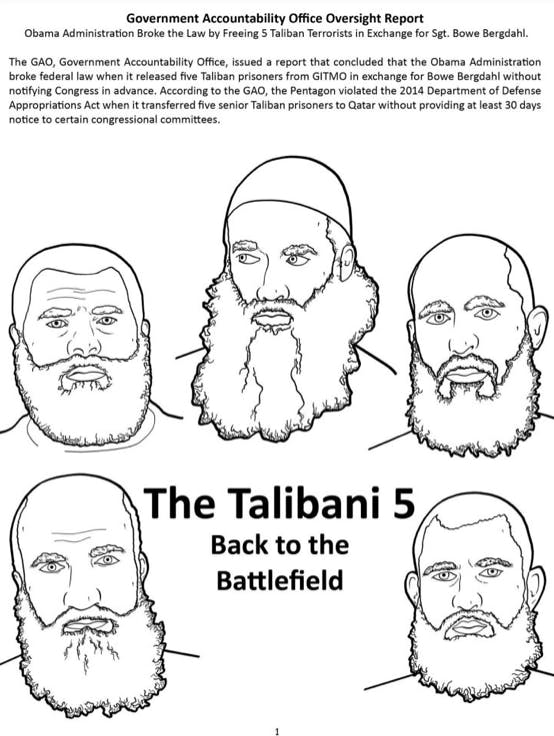 In a YouTube video about the books, which were initially published in 2010, Really Big Coloring Books founder Wayne Bell explained the rationale behind creating coloring books on such weighty political topics:

“This is not an easy subject. … This is difficult, these products are complicated and require adult supervision while addressing the murders of innocent Christian children, adults and also entire families at the hands of brutal animal terrorists,” Bell said in a statement accompanying the video. ?In an effort to explain and educate today’s youth about this hard-core cultural subject, the terrorist must be discussed with open dialogue inside the Islamic community.”

“These pages are pretty dramatic. There’s one that shows the crucifixion of some of the Christians [by ISIS]. … It comes with definite warning. …These books are not for the backpacks of kindergarten children. They are made for children, but with adult supervision,” he told the Daily Beast.

Bell added that he has sent copies of these coloring books to the education departments of all 50 states, as well as the federal government, in an effort to convince them to add the books at part of the required curriculum. It doesn’t seem like he’s had much luck so far, but he did reportedly receive a letter from the White House, which the company declined to share with the Daily Beast, expressing displeasure that the books were attempting to teach children the word ?terrorism.”

?These are not fun books, I must tell you. These books are serious books that are to be used with a parent and a child,” Bell insisted in the video. ?We’re doing our part, we’re trying to educate the country on these animals, these brutal people, these terrible humans on the planet called ISIS [sic]. It’s not about the Islamic faith. It’s not Muslim people. It’s about radical, Islamic, terrorist, Muslim extremists.”

These books are not the only instances of Really Big Coloring Books dipping its toe in the political waters.

While the majority of its offerings cover subjects like prominent African American leaders and dinosaurs, the company has also put out a book extolling the virtues of Tea Party-affiliated Texas Senator Ted Cruz.

The company also released a book about the Occupy movement. However, the description of the book on the company’s website seems to be throwing shade of movement despite the apparent neutrality of the book itself:

The popularity of this book fell off the planet the very day the occupy movement turned violent. Costing the U.S. Taxpayer millions of dollars the nation grew tired of the event as quick as it began. Administration support and the stated legitimacy or “popularity support” from politicians like Pelosi and Reed did not save this movement. The overall negative feeling and reflection of occupy was voiced my many citizens that emailed or called our company. We heard over and over……the people had a right to speak up and demonstrate; but no right to destroy..get a job… was a big comment. [sic]