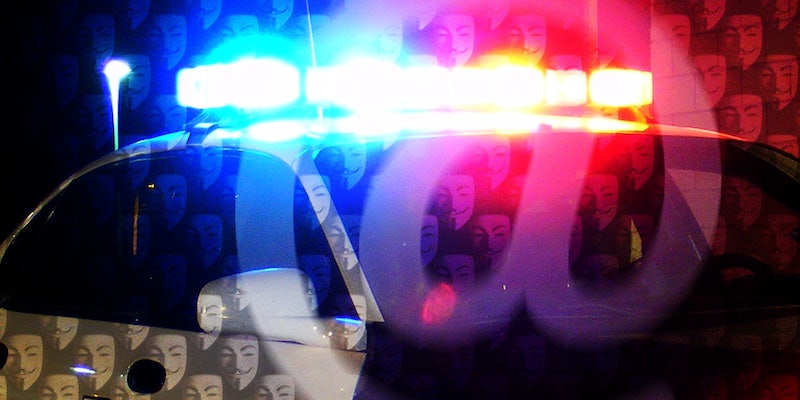 Garland had it all under control, but it still missed a glaring tip.

Two days before the deadly shooting in Garland, Texas, a pseudonymous Twitter user affiliated with Anonymous warned police that an Islamic State attack was coming.

Though law enforcement was clearly in front of the situation and prevented any civilian casualties, they missed that memo.

At 5:37 p.m. on Friday, May 1, the user, who requested anonymity for the sake of her security, tweeted at the Garland Police Department’s official Twitter account, warning them of a potential attack.

The activist participates with one of multiple IS-related groups that make a hobby of tracking, and harassing, Islamic State Twitter accounts.

On Friday, the user discovered that another Twitter account, @AnsarAlUmmah49, had referenced an upcoming attack in Garland, where a group of Americans were planning a “draw Mohammad” event.

The event, dubbed the Muhammad Art Exhibit and Contest and held under the banner of free speech, directly provoked Muslims who find depictions of their central prophet to be blasphemous. This is believed to be the reason behind the IS-related attacks on the French satirical paper Charlie Hebdo in early January.

So the user tweeted to @garlandpd with a link to the tweet in question, which called for an attack, specifically in Garland and on May 3. @AnsarAlUmmah49 has since been deleted. Like most explicitly IS Twitter users, he or she seems to have been no stranger to Twitter’s habit of quickly deleting their accounts, leading to a constant churn of accounts that struggle to stay connected to their network of friends and confidants.

While @AnsarAlUmmah49 is suspended, traces of the user’s activity are still visible online and clearly hint at IS affiliations. According to a search through Twitter engine Topsy, no one mentioned @AnsarAlUmmah49 before April 26, indicating that it is a recent account. As of that day, though, a number of accounts with IS imagery, including some that still exist, tweeted that this was an account to follow. Manual retweets of @AnsarAlUmmah49’s tweets show that he linked to deleted videos referencing the Al Hayat Media Center, better known as IS’s propaganda wing.

However, despite @garlandpd functioning as an active police Twitter account, the message never made it. “That is the first time I’ve heard that,” GPD spokesman Joe Harn told the Daily Dot when informed that tweets had tried to warn the department of an attack. “We were monitoring things; we had the FBI and ATF, but we didn’t see anything [on Twitter].”

That’s still not to say, of course, that the FBI didn’t also see the brazen IS tweets and share intelligence with Garland. For this story, the FBI continued its long standing tradition of not responding to the Daily Dot’s request for comment.

The Anonymous tipster, who is not American but declined to give her home country, insisted that she merely shared information and deserved little credit for stopping the two gunmen. “The real heroes are the police and the security guy who has been injured,” she said. “And the people who dare draw Mohammad.”

Photo via banspy/Flickr (CC BY 2.0) | Remix by Jason Reed