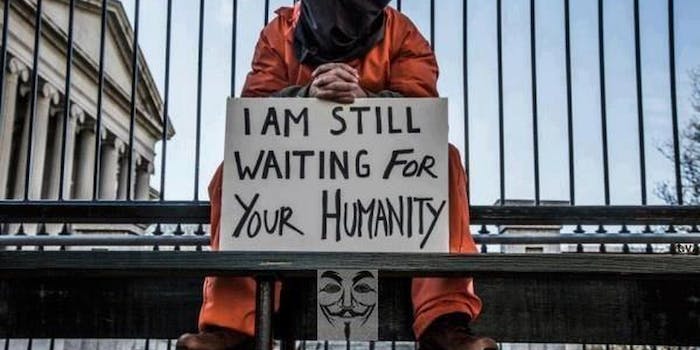 "My dude, #OpGTMO is going to be bigger than OpIsrael."

OpGTMO begins. Today Anonymous, Code Pink, and other political action groups from the U.S. and the U.K. have banded together to mark the 100th day of a hunger strike within the Guantanamo Bay prison camp.

A source told the Daily Dot, in all seriousness, “My dude, OpGTMO is going to be bigger than OpIsrael.”

That’s big, considering OpIsrael had one of the most digitally sophisticated governments on Earth scrambling. But OpGTMO’s detailed prep work and international coalition of forces, both inside and outside of Anonymous, might make the Israel op look tame in comparison.

It soft-launched on Mother’s Day, when people were encouraged to phone Michelle Obama and remind her that prisoners have mothers too. It will continue through this weekend.

With no hope for justice, over 100 men who have been held and tortured for years have gone on a hunger strike. On May 18th, it will have been 100 days since they have eaten voluntarily. Prisoners have died suddenly, violently, and suspiciously. All inmates in Guantanamo Bay have been locked in solitary confinement. Some are being force fed, an international crime. These men face the prospect of a terrible death in prison despite many of them having been cleared for release years ago. One defense attorney has already committed suicide.

It is time for the Obama administration to admit that this is a disgrace for any civilized country which upholds the rule of law. Guantanamo Bay must be closed at once, and the prisoners should be either returned to their home countries or given a fair trial in a federal court. Guantanamo Bay is an ongoing war crime. Anonymous will no longer tolerate this atrocity.

We are outraged. We, the people and Anonymous, will not allow the most expensive prison on earth to be run without any respect for international laws. We stand in solidarity with the Guantanamo hunger strikers. We will shut down Guantanamo.

Obama has repeatedly said over both of his terms that he will close down Gitmo, although in recent years he’s softened that sentiment. Anonymous, Code Pink, and their allies in OpGTMO won’t settle for less than the final closure of Guantanamo Bay and liberating the men in custody who have not been charged and who are cleared for release.

And they mean now.

Planned actions are collected on several sites: The World Can’t Wait, Anonyops, Facebook, Pastie, AnonInsiders, and are also being collated live via Twitter on the @OpGTMO account. They range from candlelight vigils outside U.S. embassies to solidarity hunger strikes in prominent spots (like in front of the White House) to rallies in the streets, to the now-obligatory Tweetstorm (hashtag #OpGTMO) to black faxes and phone calls to your representatives. If you are a Twitter user but don’t want to be visibly associated with Anonymous, that’s OK: Anonymous has created the hashtag #closeGitmo for people who support the cause but not Anonymous itself. They think of everything.

In the U.S., major rallies are planned this weekend for New York, Chicago, Washington, Anchorage, Boston, San Francisco, and Honolulu. The flashiest, most media-friendly action will likely be Saturday’s 5 p.m. rally outside the White House. What news organization could resist a photo of Guy Fawkes masks and orange jumpsuits on Pennsylvania Avenue?

Building on the lessons learned over OpAntiBully, Anonymous is working in conjunction with other organizations both official and unofficial to maximize the reach and impact of the operation, allowing those not as comfortable with the mask and dox to participate in a range of easily-accessible ways. The Chicago rally alone boasts World Can’t Wait Chicago, White Rose, IL Coalition Against Torture, Witness Against Torture, Voices for Creative Nonviolence, Chicago Committee to Free the Cuban 5, and NW Indiana Vets for Peace as sponsors.

The United Nations has called for an end to the force-feeding of hunger-striking prisoners at Gitmo, condemning it as “a flagrant violation of international human rights law and in itself constitutes a form of cruel, inhuman and degrading treatment”—but stopping short of labelling it torture.

As Waging Nonviolence reports, the force-feeding of hunger strikers is far more widespread in the American prison system than most people believe. Their expose, which focuses on non-GTMO prisoners, begins, “I know a hunger-striking prisoner who hasn’t eaten solid food in more than five years. He is being force-fed by the medical staff where he’s incarcerated. Starving himself, he told me during one of our biweekly phone calls last year, is the only way he has to exercise his first amendment rights and to protest his conviction. Not eating is his only available free speech act.”