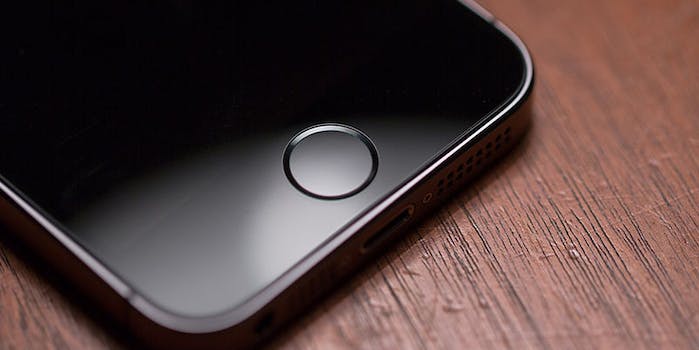 Tuesday, the hacktivist group Anonymous released a video and document purporting to tie the new Apple iPhone 5S to the U.S. government.

Tuesday, the hacktivist group Anonymous released a video and document purporting to tie the new Apple iPhone 5S to the U.S. government.

AuthenTec, responsible for the fingerprint scanners with which the new phones are equipped, was spun off from Harris Corporation, a $6 billion Florida telecom that makes much of its money—including a $1 billion contract from the National Reconnaissance Office—from government clients. (And subsequently purchased outright by Apple.)

Its officers have included VP Fred Jorgensen, formerly of the private defense contractor Raytheon, and Chairman Robert Grady, who worked for the (George H.W.) Bush White House and the Carlyle Group, majority investors in Booz Allen Hamilton, the NSA contractors and former employer of Edward Snowden.

The fact that AuthenTec and Harris have connections to the government is about as surprising as college athletes having connections to wealthy alumni. It’s hard to image a company scoring a $1 billion government contract without knowing the decision makers responsible for signing it.

But guilt-by-association is hardly as unfair as it may have seemed in a pre-NSA environment. These days it’s hard not to assume that if you can imagine something creepy and paranoid there’s a reasonable chance it’s real.

Watch the video on Vimeo here.

Given the growth in biometrics in the consumer sphere, the interest by the FBI in creating a biometrics identification system—Anonymous links to a document outlining the plan in their statement—and the apparent harvesting of biometric details on U.N. leadership by the U.S. Secretary of State’s office, the fact that AuthenTec specializes in it is, admittedly, rather more damning than it would be otherwise.

Also given the NSA’s penchant for driving with impunity over the border between legal and illegal in its lust for information collection—including the installation of backdoors in consumer Web company encryption—one can, sadly, imagine the population of the FBI’s Next Generation Intelligence biometrics database with every fingerprint harvested from across the shiny bing-bonging global honeytrap network known familiarly as the iPhone.

For now, however, it remains in the realm of imagination. Or nightmare if you prefer.