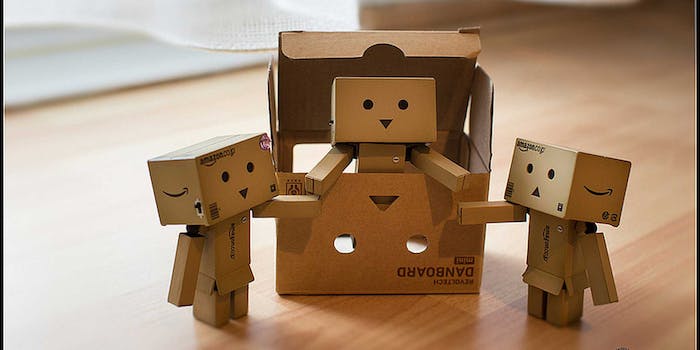 How top Amazon reviewers get thousands in free stuff

Amazon's most helpful customers often aren't customers at all.

It turns out not all Amazon customer reviews are written by people who are, technically, customers.

NPR’s Planet Money this week shed new light on a little known Amazon program that provides free products to the site’s top reviewers. In some cases, top-rated reviewers will rake in thousands of dollars worth of free stuff.

It’s part of Amazon’s Vine program. Vine is an invitation-only club for the retail giant’s top customer reviewers—those whose advice has been rated the most helpful by other shoppers. Once invited, reviewers are allowed to choose twice monthly from a list of free products that Amazon hopes to bolster the sales of by generating more reviews.

For Vine members, there are only two main stipulations in this arrangement. They must pen a review for the product within 30 days and they are never allowed to sell or give the product away. And for tax purposes, Amazon also legally retains the right to reclaim any products in perpetuity. Though as Amazon’s No. 1 reviewer, Michael Erb, tells NPR, that’s never happened in the 5 years he’s been part of Vine.

“It’s kind of like fight club, you don’t talk about it,” Erb joked about the exclusive nature of Vine.

As the site’s top reviewer, Erb, a 59-year-old wedding DJ and web designer, said he writes 2-3 reviews a day. Over the years, his involvement with Amazon has earned him countless free items.

“I’ve had everything from very cheap earbuds to $500, multifunction laser printers. I’ve gotten a spin bike that’s probably valued at close to $1,000,” he said, adding, “If you were just to add it all up it’s probably thousands of dollars worth of stuff.”

The idea behind the program, according to Amazon spokesperson Julie Law, is to give vendors the opportunity to establish themselves on Amazon’s crowded marketplace. Law said that even a product with negative reviews will sell better than a product with no reviews.

But this system irks some experts interviewed by Planet Money, who say Vine violates the implicit trust between Amazon and its customers. Anindya Ghose, an NYU professor who studies consumer reviews, said that a product with no reviews is a reflection of the fact that actual customers are not buying it. To create artificial reviews through Vine, he says, violates the inherent agreement of a customer review system. He also expressed concern that receiving products for free will inherently give reviewers a positive bias.

But Law defended the program, saying that Vine reviews actually tend to be more negative because Amazon’s top reviewers treat their task with professionalism. She also said the reviews tend focus on product itself, rather than the purchasing and shipping experience.

Law also noted that information about Vine is available on the Amazon website, though it’s tough to find if you don’t know what to look for.

Photo by Only in RAW/Flickr