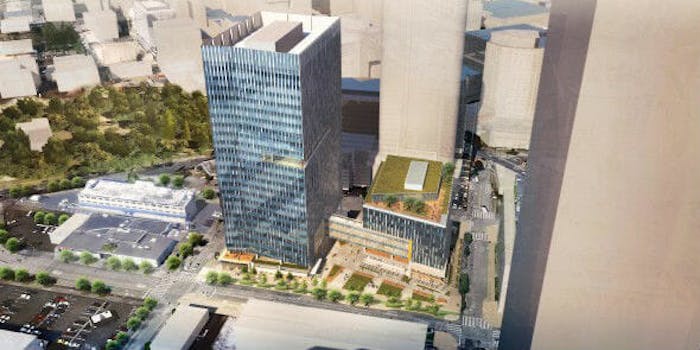 It will house more than 200 people in 65 rooms, rent and utility-free forever.

Amazon is rectifying its poor philanthropic track record by building an unusual addition in its new Seattle headquarters. The tech giant will reserve half of a six-story building for non-profit Mary’s Place to be transformed into a 47,000-square-foot homeless shelter.

The structure will house more than 200 people in 65 rooms with all rent and utility bills paid for forever, according to the Seattle Times. Amazon previously purchased and donated a vacant Travelodge on its downtown campus to Mary’s Place last year. That motel will be torn down later this year to make room for the new buildings.

“We finally got the keys to our own place,” Marty Hartman, executive director of Mary’s Place, told reporters on Wednesday.

Amazon posted a video Wednesday showing the moment it surprised Hartman with a box that housed the ceremonial key to the new shelter. The clip was criticized for appearing staged—it looked like something you’d see on HGTV. VentureBeat called it “heartbreaking…and weird.”

Seattle declared a homelessness state of emergency in 2015, the same year Washington state had the second-highest increase of homeless people (1,408) in the country. There are more than 10,000 homeless people living in Seattle alone, according to a 2016 report from the U.S. Department of Housing and Development.

A city filled with tech companies, Seattle does get significant donations from some of the largest corporations in the country. But Amazon usually isn’t one of them. The company has a reputation for not giving back to the Seattle community, one that is exacerbated when compared to Microsoft, one of the most charitable companies in the world. As NPR points out, The Seattle Times calculated corporate giving to United Way of King County (where Seattle is located) in 2012, “Microsoft made a corporate donation of $4 million. Boeing gave $3.1 million. Nordstrom, nearly $320,000. And Amazon.com? Zero.”

In 2009, Slate wrote an article titled, “The New Scrooge,” pointing out that a lemonade stand donated more money to charity than Amazon. Even the Washington Post, which is owned by Amazon CEO Jeff Bezos, remarked on its poor philanthropic track record, “Jeff Bezos’s footprint in philanthropy is smaller than one might think given the size and scope of his personal wealth.”

The new homeless shelter will be a step in the right direction for the e-commerce giant. John Schottler, Amazon’s head of real estate, says the shelter will cost the company “tens of tens of millions of dollars,” and represent its biggest donation to date.

“Mary’s Place does incredible, life-saving work every day for women, children, and families experiencing homelessness in the Seattle community,” Amazon CEO Jeff Bezos said in a statement. “We are lucky to count them as neighbors and thrilled to offer them a permanent home within our downtown Seattle headquarters.”

But some question whether a $4 billion high-tech headquarters with a homeless shelter will highlight the income-equality gap, and cause tension between the two communities. Amazon and Mary’s Place residents say there are no problems with the current arrangement, and they don’t expect any issues in the new one.

Amazon will now be looking for a new place to house the 300 employees originally scheduled to work in the area that now belongs to Mary’s Place.

The new Amazon campus with the included homeless shelter is scheduled to be completed by early 2020. The shelter will be separated from office spaces with its own entrance, stairs, and elevators.