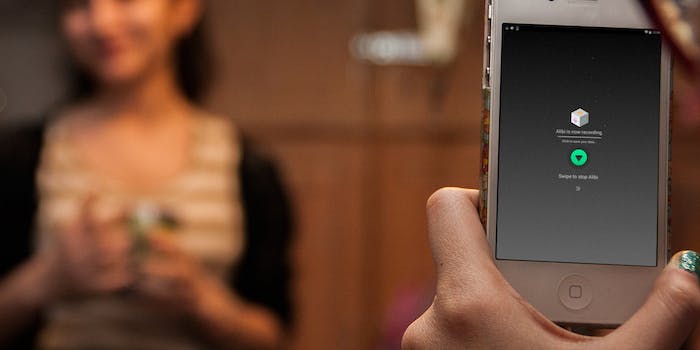 Alibi records your life so you always have a witness

Need a witness? Alibi is here.

The world is a scary place and technology brings us closer to it, for better and worse. Between shootings, wars, and riots plaguing the news everyday, technology connects us to the places and people involved, whether they’re victims, witnesses, or protesters. Smartphones, especially, play an enormous role in capturing what’s going on at the scene, but they rely on a user’s input to start and stop the app. One app wants to turn your phone into a source of evidence without you even having to take the device out of your pocket.

Alibi, released this past December, is interested in one thing: turning your phone into the only tool you’ll need to keep a record of your life. It isn’t interested in usernames and passwords, or targeted advertising, but rather providing a way to increase accountability among its users. After activating its services, Alibi automatically records a user’s location, audio, images, and video. The app then deletes anything it captures after an hour. To save the material, users revisit the app and indicate the data they’d like to save. You can choose any combination of recording methods you want, all of which the Alibi team says performs effectively.

“We found the sweet spot whereby you collect the most amount of data but you don’t have too much a hit on the battery,” Alibi cofounder Ryan Saleh told the Daily Dot. So that means a location is captured once every 15 minutes, and images are taken once a minute. Video, the biggest drain on battery life, automatically pauses when there’s nothing to capture—for instance, if your phone happens to be in your pocket.

“This would have solved everybody’s problems if they just had the app on.”

“The recommended usage is audio, image, and location,” Saleh said, adding that the team will continue making updates to improve battery optimization.

Alibi hits the market at a pivotal time in surveillance. With the flurry of media attention given to the events surrounding the deaths of Michael Brown and Eric Garner, a call for increased accountability has sparked national discourse. That’s where Saleh feels Alibi can come into play.

And we’d be remiss not to mention the Serial effect here (Alibi’s tagline should just be “If Adnan had had this app…”). The app seems to have the most chances of usefulness when corroborating evidence is needed in a criminal situation. Late last year, when the podcast spent almost an entire episode going over the whereabouts of one person’s cellphone, Ryan’s mind shot to Alibi. “This would have solved everybody’s problems if they just had the app on,” he said, though he acknowledges that this type of technology wasn’t around in 1999.

But he understands that most people don’t find themselves in such pivotal moments on a daily basis, and he argues that Alibi can be helpful during minor situations as well, such as getting pulled over by a cop for speeding, hostile attitudes from store workers, kids getting bullied in school, or workplace harassment.

With the app running in the background, “it’s more about knowing that the truth of the situation will come out,” Saleh said. “You have evidence of that, and it actually changes the way you act in the moment.” (Saleh adds that when using the Alibi, users must of course comply with local laws; some states forbid recording without the other person’s knowledge.)

When you choose to keep recorded material, the files are saved to your phone and cannot be accessed unless the phone is plugged into a computer or found with a file exploring app, Saleh says. In the future, the Alibi team hopes to create a way to sync to the cloud for a more secure transfer process. “You would have evidence over the network of moving the files and what they looked like when they moved so you could prove that they weren’t tampered with,” Saleh said.

Right now the app is only available for Android devices, though Saleh hopes that one day the team can launch an iOS version. Saleh explains that Apple’s guidelines do not allow for an app to continue running in the background once it’s been minimized.

Saleh says that the app has gotten a few hundred downloads so far, and just under 50 percent of them are international. The statistic surprised the team, which hasn’t yet advertised their product outside of the United States, but Saleh understands how conflicts everywhere have uses for products that can hold someone accountable for their actions. “It’s your right as a person to record the situation you’re in,” he said. “And should you need the evidence, you’ll be able to have it.”