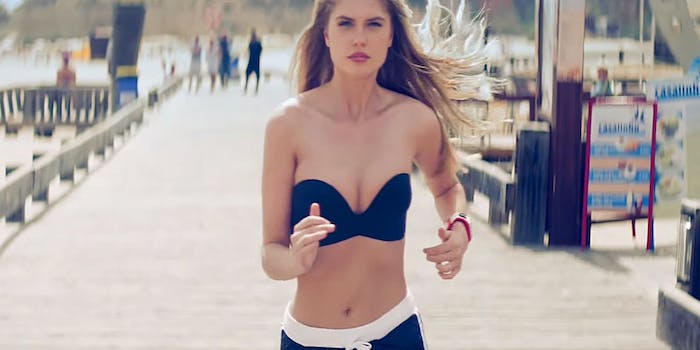 See that blurry little thing on the model's wrist? Yeah, that's what we're supposed to be focusing on.

Upon first viewing, you’d be forgiven for thinking that the latest ad by Netherlands-based GPS navigation company TomTom is for a fitness-tracking strapless sports bra that monitors your heart rate, and model Alexandria Morgan is just there to show ladies how TomTom’s product looks on a real woman’s body, albeit an exceptionally fit and attractive one.

The ad, which was reportedly banned from TV, is actually in reference to the TomTom Runner Cardio watch, TomTom Runner Cardio, a fitness-tracking band. It costs 219.99 British pounds and comes with a built-in heart rate monitor and a calorie counter. (Hey, we’ve definitely covered weirder.) And the tagline, “the joy of running strapless,” refers to the joys of running without the chest strap that many wearable fitness trackers come with. Get it?

So what, exactly, is the relationship between a nubile 20-year-old model’s breasts and an overpriced fitness tracking wearable? And how, exactly, did TomTom think its female customers would respond to an ad that so blatantly objectifies women’s bodies? The answer to both of those questions is unclear at this time, but it’s nice to see that sexism in tech is alive and well across the pond as well.