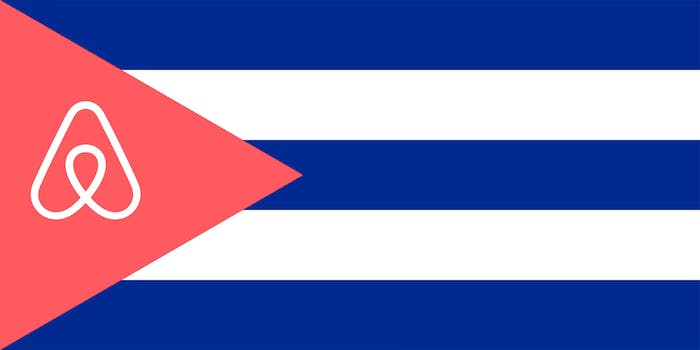 The island nation is becoming a vacation-rental gold mine.

Vacation-rental giant Airbnb wants to get special permission to serve all travelers in Cuba—not just Americans.

Airbnb was the first major U.S. company to set up shop in Cuba once President Barack Obama declared his intention to normalize relations with the island nation.

In January, Obama set out 12 types of travel American citizens could make to Cuba without special permission, including attending artistic events, religious travel, and educational trips, and Airbnb rushed in to serve those travelers. Now, Airbnb has applied for a special license from the Cuban government that will allow them to serve not just U.S. citizens, but any travelers who wish to find accommodations.

“We are applying for a special license to accommodate non-Americans who want to travel to Cuba for approved reasons. That’s something that’s in process,” Nathan Blecharczyk, CTO and Airbnb cofounder told Associated Press on Wednesday during a trip to the island. “Airbnb has the majority of its users outside of the U.S. … I think there is huge potential to market to that audience.”

Blecharczyk told AP he was uncertain whether the proposal would be approved.

“It’s too early to tell,” he said. “I think the intent is there coming from the president in terms of the way he talks about his hope for Cuba and the direction he wants to take, but there is a bunch of process that has to be worked through.”

Airbnb currently has about 2,000 listings in Cuba, with Blecharczyk saying the average Cuban renting rooms through the service brings in an average of $650 each so far, a rather startling amount if true. Average monthly income in Cuba is about $20. On the other hand, the Cuban private sector has seen strong growth for years.

An Airbnb representative told the Daily Dot that these 2,000 listings (a number which has doubled since launch) are spread across 30 cities and towns, with 40 percent of them located in Havana, Cuba’s capital. They believe they will continue to see heavy growth of their service in Cuba.

“We anticipate that Cuba could become one of Airbnb’s biggest markets in Latin America,” Airbnb said, “but we are committed to taking a measured approach. We want to ensure we’re making a positive impact for the Cuban people and supporting local Cuban entrepreneurs who are excited to share their country and culture with the world.”

Other U.S. companies have joined Airbnb in establishing beachheads in Cuba, including Netflix and Google.

The possibility of profit from one of America’s nearest neighbors is not the only reason for U.S. firms establishing offices in Cuba, according to Ellery Roberts Biddle, the director of Global Voices Advocacy and a fellow at Berkman Center for Internet and Society at Harvard, where she is “researching and writing about the politics of Internet use in Cuba.”

There is also prestige.

“I think it’s especially appealing because of the mystique that Cuba carries for U.S. people,” she told the Daily Dot. She also cautions that the rush by Cubans to use services like Airbnb could create difficulties. Cubans have rented out rooms in private homes (“casas particulares”) for over a decade now and have a sense of their nation’s regulatory demands. The enthusiastic embrace of Airbnb with its American user base contains the seeds for possible conflict.

“The casa particulares system in Cuba is well-established,” said the company’s rep. “Airbnb hosts in Cuba are expected to follow the same rules that apply to all owners of casas particulares in Cuba.”

In late May, Obama removed Cuba from the list of state sponsors of terror, further accelerating business interest in the nation. Removal of the embargo itself will take an act of Congress, but there is some reason for optimism on that front, given that they did not object to the removal.

The island should be a fascinating scene of systems and cultures adjusting to one another for the sake of growth in the months and years to come. There will no doubt be both success stories and car crashes.