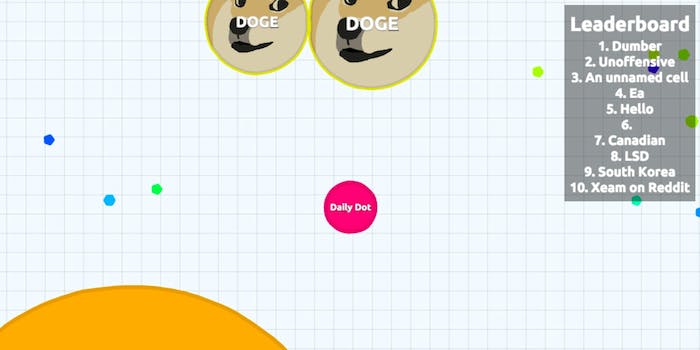 Get hooked on the newest, weirdest viral Web game

It's all that matters.

If you’ve conquered Kukukube and forded the river from within a tweet, we’ve got a new browser-based addiction with your name stamped all over it. (Life did seem to lose its luster a bit after maxing out our Kukukube score.) Meet agar.io, a sparse, browser game that feels like a Reddit thread spliced with a round of Pac-Man.

In agar.io, you control a single cell, which you name (that’s the Reddit part) and then send zooming around by moving your cursor. Unfortunately, everyone else controls a cell too, and they all want to eat your cell because winning. You hop into an ongoing instance of the game which is tracked on a crude leaderboard in the upper right-hand corner of the browser tab.

Your options as a cell are pretty limited: navigate with the cursor, press space to “split,” and press the W key to make your cell get a little less plump. Basically go around eating other people and don’t get eaten—simple enough, right? The Daily Dot (get it?!) didn’t fare so well, but we’re only just getting the hang of it.

It’s a basic game, but Agar.io’s beauty is the sheer strangeness of fleeing the U.S.S.R. only to run right into doge—or worse. It’s all of your favorite memes, ruthlessly seeking to devour each other and win the Internet once and for all. And yes, of course there’s a subreddit.