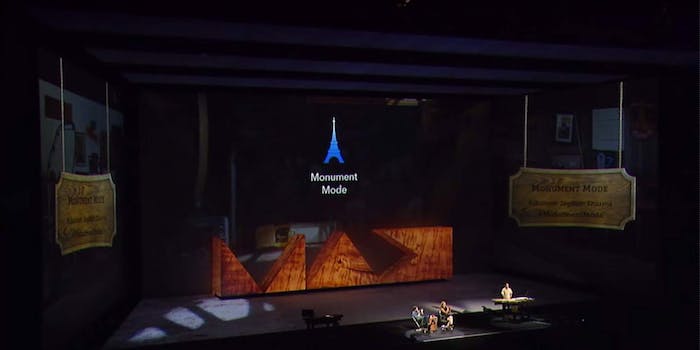 The worst part about trying to snap photos at popular tourist attractions is everyone else there is trying to do the same thing. Luckily, a new algorithm can remove the other tourists from your photos.

Adobe is behind the photo-fixing feature, dubbed Monument Mode, which the company showed off during this year’s Max Conference (with some help from Nick Offerman). Essentially the camera option does automatically in real time what you’d otherwise have to do manually after the fact.

Monument Mode analyzes what is taking place through the camera lens in real time and removes the moving objects from the frame. The stationary object—whatever tourist trap you’ve happened to find yourself at—remains while the flower shirt-clad tourists and their selfie sticks disappear.

Monument Mode isn’t the first solution for removing unwanted parts of images (in fact, Adobe has a program for just such a thing called Photoshop that you might have heard of).

What makes the new feature so interesting is the ability to generate the expected image in real time. It allows the photographer to take a picture of its subject as if no one else is around, making it easier to get the shot they want on the first try instead of continuously snapping and hoping one turns out.

Adobe offered no indication during its presentation as to when Monument Mode will be available or what products it might show up in. The obvious choice is a camera app. Though Adobe offers a wide-ranging suite of mobile apps at the moment, the company does not have one for taking photos—just for manipulating them after the fact.