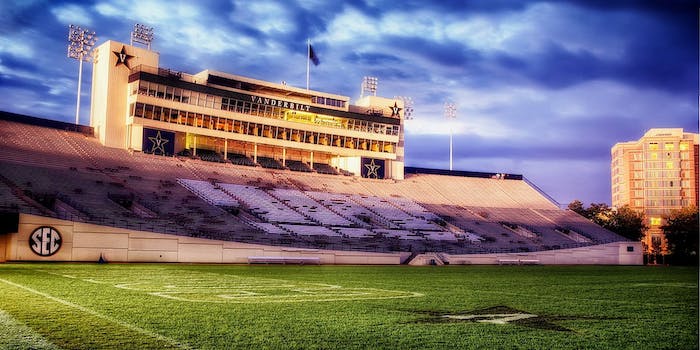 What is it like to come out as a survivor of sexual assault? For a student at Vanderbilt University, it’s meant being called a “crazy bitch,” “psycho,” “NASTY AS SHIT,” and a “no-good cunt.”

In February, Jane Doe filed charges against AEPi, a Jewish fraternity at the Nashville school’s campus. As reported by the Hustler, Vanderbilt’s student newspaper, an Internet thread emerged this month to shame, mock, and discredit her.

The above comments were posted to CollegiateACB, a website that allows college students around the country an open forum to discuss issues relevant to their university. The setup is similar to Rate My Professor, a wildly popular site that allows students to grade their lecturers.

Websites like these are meant to serve as a barometer of campus culture, an uncensored view of what’s happening on campus and in the classroom, and in the case of Vanderbilt, CollegiateACB succeeded.

Typical posts on Vanderbilt’s ACB forum range from posting about lost phones to comparing notes about who are the “biggest sluts” on campus. Students debate which female students are the most “disgusting,” “hideous,” or “trashy as fuck.” One student, called a “ratchet bitch” and a “giant whore,” elicited the most ire from respondents as male classmates dogpiled on her about her “reputation.”

But apparently you don’t even need to know your target to think she’s a “desperate whore.” In the “biggest slut” contest, another poster puts in a vote for “some tall blonde kinda big girl, seen her around campus.”

He continues, “A few of my friends hooked up with her last year and never went back. They don’t even know her name.”

Into the fray emerges “the girl who ratted.” In a thread devoted specifically to the sexual assault, forum users target Jane Doe for speaking up. Their arguments suggest that they consider the truth of her assault less important than a fraternity’s ability to operate without criticism or legal ramifications. Throughout the conversation, the verdict seems to be that Jane Doe is not a victim here, but a “snitch” who should have kept quiet.

In an editorial for the Hustler, editor Andre Brouillard claims that, like in prison, the concept of ratting is key to the discussion:

This repeated use of the word ‘snitching’ in the thread implies that the victim has revealed a secret that should have been kept hidden behind closed doors—under the rug and on floors that stick like flypaper and stink of old beer. She has tattletaled and transgressed against an entity larger than herself, an operation to keep Greek Life’s stimulant-fueled heart beating while the perceived vultures circle overhead. The OP (original poster) issues a rallying cry: ‘we need to stick together and prevent shit like this from being ok.’

The forum can’t seem to decide whether or not Jane Doe was raped, but that appears to be beside the point. It’s not just about policing behavior but taking one of the team—for the good of the Greek community. On this note, one of the posters writes, “its honestly a shame this is what the school has come to. have some integrity ladies.”

Brouillard claims that the onus here isn’t on the attackers but on her to be a good sport. “The message is: Force a smile, grab another beer, look your assailant in the eye—and don’t say a word,” he writes.

According to Brouillard, these are the consequences of exposing the backstage of fraternity life at Vanderbilt University—pulling back the curtain on the boys-will-be-boys mentality of college masculinity—and girls like Jane Doe can expect social suicide. Coming forward means become one of the girls on the “biggest sluts” forum, a victim not of rape culture but of her own damaged reputation.

For women who have even limited Internet access, the fact that Web culture often shames, degrades, and harasses women, reinforcing a pattern of abuse, won’t be news. In an article for the Pacific Standard published in January, writer Amanda Hess discusses a Twitter account “set up for the purpose of making death threats” to her person.

“Happy to say we live in the same state,” one man wrote to her. “Im looking you up, and when I find you, im going to rape you and remove your head.”

Hess’s piece explored how women aren’t welcome on the Internet, the ways in which their voices are forced out of discussions and silenced, but the case of Vanderbilt shows the real-world implications of online harassment—it makes it easier to operate in the real world. Hess struggled with being able to prosecute the men who sent her death threats, finding law enforcement unresponsive, and legal retaliation for on-campus sexual assaults has likewise proved an uphill battle.

A number of colleges across the country have witnessed a sexual assault epidemic in the past few years, with universities as diverse as UC Berkeley, Michigan State University and Philadelphia’s West Chester University (among many others) facing criticism for how their campus administrations have handed on-campus assaults.

At Brown University, a rapist who allegedly choked his victim received a one-semester suspension before being allowed back on campus. Rape survivors at Harvard were forced to file a federal complaint with the Department of Education—with an online petition alleging that the university “failed them by dismissing claims, neglecting to provide safe accommodations, and refusing to pursue disciplinary cases against aggressors.”

In a culture that continues to make survivors feel unsafe, many who experience sexual assault never speak out. According to statistics from the Department of Justice, 95 percent of rapes that occur on a college campus will never be reported to the campus police.

There’s a reason why: a 2011 survey in the Chicago Tribune found that over the past six years, less than 3 percent of those allegations ended in a conviction, meaning that few campus rapists will ever see jail time. Students like the Brown choker are the rule, not the exception.

Facing those odds, Margaux Jonda, a former student at Indiana University, thinks it’s not surprising that many survivors remain silent about their experiences. After Londa reported her sexual assault to police, they declined to press charges against the man who raped her. Instead of jail time, he got a one-year suspension from the university before being allowed to finish his studies.

“Part of me wonders why someone would even bother making a report,” Lonsway told the Tribune. “What’s the point in going to police if they don’t do anything about it? It almost makes me feel worse.”

However, what makes the Vanderbilt Jane Doe case unique is that the campus didn’t leave the case solely to administration to handle. Allies at the university have rallied behind the campus, defending her from the climate of bullying that sets to make an example out of her. To show their support, students have been changing their Facebook profile picture to a graphic that reads “I Am the Girl Who Ratted,” in order to raise awareness and hold the university accountable to action.

And other colleges are following suit. At DePaul University, students protested university inaction to alleged assaults from campus athletes, specifically calling upon the school’s Athletics department to address the issue. In a university building, students hung a banner claiming, “We know what you do. #youcanthide!”

But changing the culture of sexual assault on campus will take more than social media campaigns and angry protests. For that conversation to change at universities across the countries, the people in charge need to start listening.