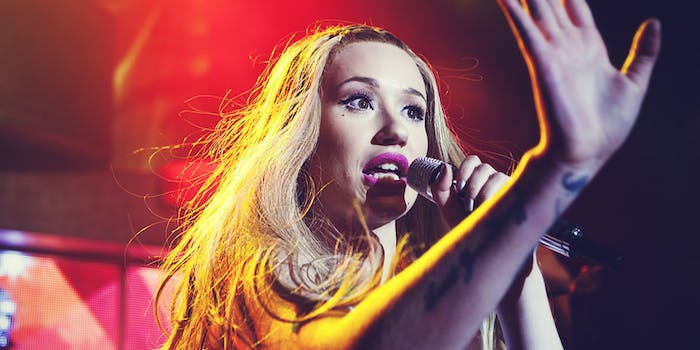 How to talk to white people about Iggy Azalea

That’s what many keen observers may have, in fact, correctly gleaned from Nicki Minaj’s candid remarks about “authenticity” during her BET Awards acceptance speech. But the rapper has repositioned her statements, saying the media “put words in her mouth” and that her spirited quips weren’t at all a diss to Iggy Azalea. Instead, according to Minaj’s tweets on Wednesday, she spoke out to “motivate” up-and-coming female emcees to keep pushing the pen to the paper, and to challenge a male-dominated industry.

But it still sounds as though Minaj is throwing at least a few drops of shade.

Minaj tweeted, “I fell in love with Lauryn Hill b/c I knew she was the author behind those amazingly profound and articulated songs on the MisEducation … It’s the same reason I have a different level of respect for Missy. I know she’s a writer and a producer. Women MUST aspire for more.” Her words respectfully acknowledged two legendary black female rappers, creating what’s known as a “compliment sandwich” as she addressed Iggy Azalea, who has been said to not write her own rhymes—perhaps one of the most cardinal offenses within rap music.

“I’ve congratulated Iggy on the success of ‘Fancy,’ publicly. She should be very proud of that. All the women nominated should b proud,” she said, notably without any of the high praise given to Lauryn and Missy’s lyrical genius, before closing with why she will keep encouraging women to write.

In case you weren’t following, Nicki’s mention of Iggy’s “success” is the meaty criticism sandwiched between the golden buns. It’s also a formula many other writers and music critics adopt while discussing Iggy’s demerits as a female rapper and cultural appropriator.

Depending on who you ask, including an offbeat piece from Forbes, rap’s “Fancy” new starlet is now dominating the entire genre, especially since she’s now the female rapper with the longest reign atop the Billboard Hot 100—a record previously held by Lil’ Kim and a peak never reached by even Minaj’s pop-crossover hits “Starships” and “Super Bass.”

Although Forbes eventually backpedaled, it’s a sentiment about Iggy that now resonates with many—and has even made Nicki sneer. That’s why many other black female artists and emcees such as Rah Digga, K. Michelle, and Azealia Banks go out of their way to express disapproval of Azalea’s antics.

At the BET Awards earlier this week, Azalea was the only other person nominated who could’ve even possibly beat out Nicki Minaj for Best Female Hip-Hop Artist. Given the recent trend of white artists dominating Rap/Hip-Hop and R&B categories at virtually every major awards show, it wouldn’t have surprised anyone if Iggy Azalea had bested Minaj, let alone at a ceremony that expressly celebrates African-American music and culture.

But it seems as though every time conversations crop up about Iggy Azalea, Macklemore, or even Robin Thicke’s appropriating ways, the vocal critics get panned—mainly by white people—as a horde of racists for “attacking” their participation in black artforms, no matter how intrinsically rooted they are to black experiences.

The upset usually reaches a fever pitch because white rappers like Iggy Azalea get away with appropriating Blackness, ripping off everything but the social and institutional indignities rooted in the black experiences that lead to the creation of hip-hop.

And more often than not, the conversation delves into a minefield of these potential impasses:

1) “So what if they rap or sing like black people?”

Contrary to most media narratives, black people don’t all speak the same way. Our sayings, dialects, and even vocal dynamics may bear common roots, but are heavily influenced by life experiences, education and regional differences. Even in hip-hop, artists like Trina, Eve, and Da Brat have exhibited a variety of stylings and flow.

Even though Macklemore arguably uses and abuses the white privilege he’s fully aware of having within hip-hop and popular music, he at least rhymes using the vocal dynamics derived from his lived reality. Iggy Azalea’s natural speaking voice is actually the sugary-sweet, rural Australian accent she grew up with—not the grungy, Southern “blaccent” she adopts for the sake of rapping.

2) “You’re just hating on them because they’re more successful.”

The real question here isn’t about the hard numbers, but even those figures currently side against Iggy. A look at the numbers tells a completely different story. Although Iggy Azalea is the queen of Billboard’s Hot 100, a throne many black female emcees have never gotten the chance to sit upon, she has yet to match their sales figures and business ventures. Queen Latifah doesn’t rap as much anymore, but her career of more than 20 years includes talk shows, TV series such as Living Single, product endorsement deals, acting roles and even an Academy Award nomination for Chicago. As for Nicki Minaj, her debut of Pink Friday moved 375,000 copies in its first week, compared to 52,000 for Iggy’s The New Classic.

But fans should instead ask about and, eventually, acknowledge the conditions that allow white rappers like Iggy Azalea to reach such stratospheric levels of popularity. More specifically, Iggy Azalea’s public image merits examination as one that mainstream white American audiences consume voraciously at the expense and exclusion of her black counterparts. She makes money and breaks records, largely in part, because she’s a blonde, white, foreign woman who’s doing the new “hip” thing, even if her act may be a bit recycled.

Sure, she can. However, there’s a difference between appreciating an art form and adding to its richness, and appropriating a minstrel-like caricature that’s composed of various tropes. With Azalea, it’s the obsession over her voluptuous curves, the “blaccent,” and an over-identification with the abject poverty disproportionately encountered by black folks, as seen in her video for “Work.”

In the entertainment business, almost all celebrities have highly manicured public fronts that have been calculated for their profitability. It applies to rap, but only to a certain extent. Perhaps if Azalea were instead centering her raps on topics such as growing up in Mullumbimby, Australia, and doing it with her own accent, maybe we’d be looking at her differently—or not at all.

4) “But they had help from a black artist, so that gives them credibility.”

T.I. deserves all the credit for mentoring Iggy Azalea, but that’s not where his culpability ends.

Just as he profits from the offensive nature and history of Native appropriation via his Grand Hustle label and merchandise, T.I. does the same by enabling white artists like Robin Thicke and Iggy Azalea to rip off blacks with impunity.

Last fall, T.I., Thicke, and Pharrell Williams preemptively sued Marvin Gaye’s family over “Blurred Lines,” after the late-singer’s estate claimed the trio ripped off the sound of Gaye’s hit “Got To Give It Up.” Gaye’s family eventually countersued all parties involved, and earlier this year, reached a settlement with music publisher Sony/ATV. The other battles continue.

T.I. has a similar relationship with Iggy Azalea, often helping her fend off scorn about her lack of authenticity. While discussing the infamous Forbes article in an interview, T.I. said, “She is running this moment in hip-hop, but to say running [hip-hop]; that’s a very broad statement. Although I feel eventually that is the outcome.”

5) “Black people should be flattered that someone’s singing and appreciates their music.”

The success and vitality of black-created genres doesn’t depend on white people performing the music, especially when it’s been pillaged and stolen for decades.

As noted in considerable detail over at Racialicious, various white icons and their hits—including Elvis Presley’s “Hound Dog,” Madonna’s “Vogue,” and “We Can’t Stop” by Miley Cyrus, to name a few—all are culprits. Despite that history of cultural theft, black artists like Aretha Franklin, Michael Jackson, and Jay-Z have smashed Billboard records, sold out concert venues worldwide, and influenced many white artists who acknowledge their legacies and truly appreciate the genres—artists like Adele, Duffy, and Sam Smith.

If nothing else, at least their voices and lyrics are theirs.