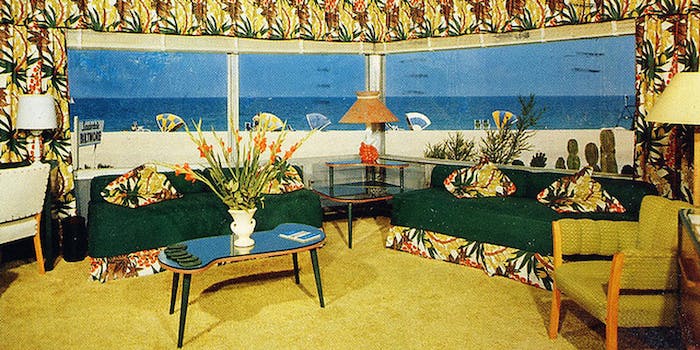 Has the job of remembering officially been outsourced to the Internet?

The Internet is slowly but surely becoming a great, collective, living and breathing human memory bank, with little bits of history lodged in remote corners.

Five years ago, I found an old postcard at an antique mall here in Ohio. The image on the postcard was of a questionably-decorated, gaudy, yet stunning hotel room at the Lauderdale Biltmore from what appeared to be the 1950s. I scanned the postcard, posted it on Flickr,  and tagged it with some descriptors: “ft. lauderdale,” “biltmore,” “florida,” “1950s,” “the real mid-century modern.” And then I forgot all about it.

I was the GM of the Lauderdale Biltmore from 1973-1988. This appears to be the view from apt #210…a one bedroom deluxe suite. Actually, it was just to the south (second unit) of the lobby on the same floor. It had a terrific view, but unfortunately no balcony. At peak season (Feb1-May 1) in ’73, this deluxe ocean front suite commanded $75 per day. When I redecorated it that year, it’s colors were medium blue walls, white trim, and ocean blue carpeting, with white flecks…very chic at the time! I loved this hotel and was in tears when I saw it demolished 6 years ago.I lived on property for 10 years.

This was fascinating. Suddenly it wasn’t just a picture of a gaudy hotel room from the 1950s; it was apt #210, a one-bedroom deluxe suite, $75 per day. Having stumbled across the scan via a search, the general manager of the Lauderdale Biltmore from 1973-1988 had given me new knowledge of this little room, and I, in turn, had given him, momentarily, a memory of the hotel he loved.

This brought back a lot of good memories. I vacationed here every year in the late 70’s with my wife and twin daughters. When they were 5 they loved to jump of the high dive. It was a great family place. My daughters would go into the snack bar or gift shop with out money and they always let them have what they wanted and would catch up with me later to pay the bill. You just don’t find Hotels like this anymore and it’s a real shame.

A whole vacation full of experience at the Lauderdale Biltmore: the high dive, the snack bar. This brought back a lot of good memories. All from a quirky little postcard I found and scanned and put on the Internet for the world to see.

The Internet is a wonderful tool for assembling our collective knowledge in one place. Wikipedia is the perfect example of this: a place where collective knowledge is refined and fine-tuned into an encyclopedia of facts and events and biographies, however questionable. The rest of the Internet is in on it too, assembling entire commercial breaks from various television stations uploaded to YouTube, long ago played baseball games, scans of old out-of-print books. The Library of Congress has even gotten into the act on Flickr, posting digitizations of their vast catalog of photographs for users to tag with keywords for each search and location. Tagging and search is tedious and imperfect, but it aids us tremendously in finding fragments of history lodged in the most remote corners of the Internet.

Along with things that were already in the public domain, the television shows and baseball games that were broadcast to everyone, there are an increasing number of personal souvenirs of the past gradually appearing on the Internet. It’s these personal souvenirs that seem to most impressively contribute to our collective memory. Scanned brochures, ticket stubs, blurry photographs of family vacations. Somewhere on the Internet might even be a picture of someone else’s childhood, a trip to King’s Island perhaps, with me in the background. Detailed accounts in forums of events that few people might have experienced, but, once accessed, brings back a flood of new memories to be assembled and posted and disseminated. Like a postcard from the Lauderdale Biltmore, and a memory of a family vacation. 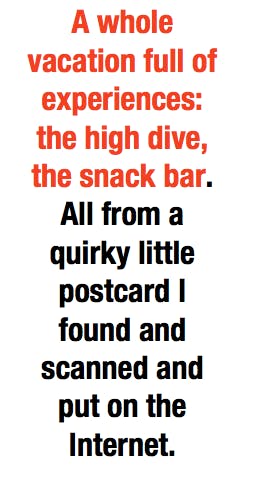 As more of these mementoes are brought forward and become publicly accessible, as we find better ways to tag and search, we are coming closer and closer to creating a massive online collective memory; a living, breathing, changing vision of the world from our perspective, to be shared and passed along and consumed and sighed over. Were you there? Did you see it when…? I was there!

But what about the things we can’t remember? A feeling you had but no one else did, and experience that was entirely yours? I often wish we had “Memory Search,” a program that would comb the back alleys of your mind for memories long forgotten, the answer to “where was that little restaurant we found in Amsterdam that did the amazing crêpes?” or a name dropped along the way. Of course, Memory Search would be ripe for abuse, and most of us (I hope) would distrust anything that was installed in our brains and could read our thoughts. But wouldn’t just that one aspect of it be lovely?

In a sense, we’ve already created such a thing: we’re simulating Memory Search, with how we use social media. We catalogue our lives on Twitter, Facebook, Vine, Instagram, Flickr, and Tumblr, sharing our own nostalgic mementoes, tagging photos and posts, creating a living searchable library of our memories and experiences. Live-tweeting and Instagramming the Grammys or a concert or a dentist appointment—so that it will be there later when we go back to look for it. The ability to do this has, in turn, created a strange compulsion: the need to get it all down somewhere “permanent” for when we can no longer find it in our minds. 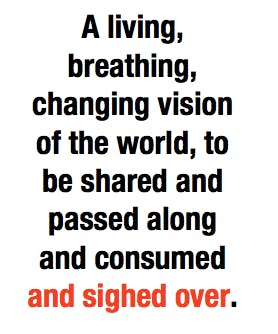 Of course, we can’t capture every moment and encapsulate it somewhere on the Internet for later reference. Just as our own memory is full of holes and moments half-remembered, the collective Internet memory will forever be missing pieces of the smallest moments of every day: the moment you wake up and first see the light through curtains; the scent of mandarins coming from a market stand you pass on the street; that one time you were driving and the sun was setting magnificently, kissing the trees with gold, and you knew it was dangerous to reach for your phone so you just stared out of the windshield in awe, compelling yourself to commit the sight to memory.

While there may be more and more images of postcards, and ticket stubs, and clips of a grainy baseball game available for us to find and reference online, there are some things we’ll just have to remember for ourselves. We are terrified of the impermanence of our brains, but sometimes it’s still the best we’ve got.