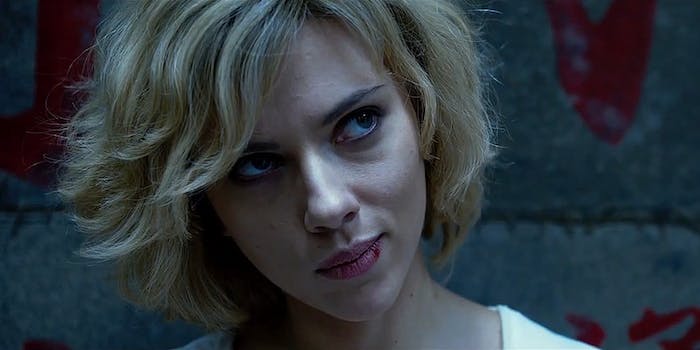 Meanwhile Frozen, Maleficent, and Lucy are proving that women come to see movies that focus on women. Who could have known?

Comic books are taking some historic steps these days: Captain America is black, Thor’s a woman, Batwoman’s a lesbian, and Batgirl’s roommate is transgender. If you’re playing along at home and you’ve counted your free space, congratulations, you just won minority representation bingo!

So why can’t Marvel Studios find a way to fit a female-led superhero movie onto its copious release schedule, a release schedule that somehow includes yet another Captain America movie? There’s something deeply wrong with a universe where Ant-Man is getting his own movie but Black Widow is still stuck playing second fiddle to a has-been like Hawkeye.

When asked about the prospect of a female-led Marvel movie by a contributor from Comic Book Resources, Marvel Studios president Kevin Feige delivered an awkward, backpedaling non-response:

I hope we do it sooner rather than later. But we find ourselves in the very strange position of managing more franchises than most people have—which is a very, very good thing and we don’t take for granted but is a challenging thing. You may notice from those release dates, we have three for 2017. And that’s because just the timing worked on what was sort of gearing up. But it does mean you have to put one franchise on hold for three or four years in order to introduce a new one? I don’t know. Those are the kinds of chess matches we’re playing right now.

And the Academy Award for saying something without really saying anything at all goes to…Kevin Feige! He would be here to accept this award but he’s got a lot of pawns on his chessboard right now.

Marvel Studios is indeed playing chess with an expansive roster of memorable comic book characters. But it’s been over six years since the release of the first Iron Man movie; we’re out of the early game and it’s time for Marvel to start promoting some of its pawns to queens.

We’ve had five, yes five, Spider-Man films while Spider-Woman stays out of the spotlight. We’ve had to endure so much together as moviegoers: Tobey Maguire dancing aggressively in a jazz club; James Franco and Kirsten Dunst making omelettes while dancing to swing music; Topher Grace…well, just being onscreen; and that was only Spider-Man 3. Surely a Spider-Woman movie would have more legs on it than a tired storyline that’s already received a BBC miniseries worth of screentime so far.

There are other Marvel superheroines who are ready for their close-ups as well. A Ms. Marvel/Kamal Khan movie could make history by being the first superhero movie led by a Muslim character instead of being, you know, another superhero movie that villainizes Muslims. She-Hulk would likely be more fun to watch than Eric Bana, but that’s not exactly a high bar to clear. And if Marvel Studios is feeling daring, surely they could salvage Elektra from whatever copyright purgatory she’s been languishing in since 2005. There are plenty of dynamic superheroines waiting in the wings for their turn on the silver screen.

So what’s taking Marvel so long? Feige knows, at least, that he can no longer use the excuse of poor box office performance. In his Comic Book Resources interview, he issues the following disclaimer:

I very much believe that it’s unfair to say, ‘People don’t want to see movies with female heroes,’ then list five movies that were not very good, therefore, people didn’t go to the movies because they weren’t good movies, versus [because] they were female leads. And they don’t mention ‘Hunger Games,’ ‘Frozen,’ ‘Divergent.’ You can go back to ‘Kill Bill’ or ‘Aliens.’ These are all female-led movies. It can certainly be done.

The iron has never been hotter for female-led genre fiction on the big screen. Women have already been proving that we are passionate fans of comic book movies. The audience for X-Men: Days of Future Past, for instance, was forty-four per cent female partially because of the sheer quantity of handsome dudes it offered but mostly because women are X-Men fans who show up just like the boys do.

But women are turning up in even more impressive numbers for the latest crop of female-led fantasy and science fiction flicks. In addition to giving us the shower song to end all shower songs, Frozen earned over $400 million domestically (and became Disney‘s biggest worldwide hit ever) with a fifty-seven percent female audience. Maleficent catered to a sixty percent female audience to the tune of a cool $234 million. Lucy is currently following suit by outpacing box office expectations with a female lead and a fifty percent female audience. Sure, Marvel can trot out Chris Evans in his red, white, and blue spandex one more time, but female audiences are responding in a big way to the prospect of seeing themselves represented on screen.

These numbers are starting to prove to a stubborn Hollywood that the old ways of moviemaking are not just exclusionary, they’re also less profitable. Expert analysis at FiveThirtyEight, for example, shows that female-centered movies that pass the Bechdel Test actually perform better at the box office in terms of return on investment than movies that fail. And, as The Mary Sue reported in July, the lagging summer 2014 box office numbers can be attributed to the fact that Hollywood continues to cater to young men even though their box office attendance is dropping. Meanwhile, Frozen, Maleficent, and Lucy are proving that women come to see movies that focus on women. Who could have known?

For now, some Hollywood executives would rather lose money chasing a demographic that’s fleeing theaters than pay attention to the female butts that are currently filling their seats. Sexism, it seems, is still powerful enough to trump capitalism when push comes to shove. But, as Walt Hickey notes over at FiveThirtyEight, “It may be only a matter of time before the data of dollars and cents overcomes the rumors and prejudices defining the budgeting process of films for, by and about women.” Ah, yes, the familiar devil’s bargain of late capitalism: men will surrender their prejudice toward women for the right price.

And prejudice might indeed be the only explanation we have left for Marvel’s sausage fest of a movie lineup. By speaking in such a circumlocutory way about Marvel’s failure to produce a female-led superhero film, Feige leaves us to wonder what kinds of conversations Marvel executives are having behind closed doors. The female characters are poised for action, the potential financial return is more promising than ever, and audience demand is at an all-time high. You don’t need to be heroic to bet on a Black Widow movie in today’s cultural and economic climate. You just need to care about your female fans.