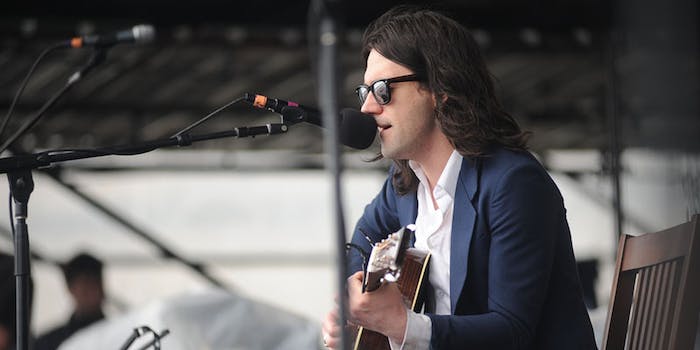 When men’s rights activists win, everybody else loses.

Conor Oberst is a 34-year-old singer-songwriter better known as Bright Eyes, a moniker under which he records sad, heartfelt, occasionally acclaimed folk music. And now, thanks to a strange series of events, he’s also an unofficial MRA icon.

For those uninterested in indie music, feminism, or Internet culture, this whole business started several months back, when a woman who went by the name Joanie Faircloth accused Oberst of raping her in a comment section on xoJane. Since then, Oberst has sued his accuser for defamation, which in turn led to a very visible campaign to discredit Faircloth and prove his innocence.

Finally, Faircloth (real name Joan Elizabeth Harris) issued a public apology this week, claiming she made the whole thing up, and absolving Oberst of any wrongdoing. In it, Harris writes:

The statements I made and repeated online and elsewhere over the past six months accusing Conor Oberst of raping me are 100 percent false. I made up those lies about him to get attention while I was going through a difficult period in my life and trying to cope with my son’s illness. I publicly retract my statements about Conor Oberst, and sincerely apologize to him, his family, and his fans for writing such awful things about him. I realize that my actions were wrong and could undermine the claims of actual sexual assault victims and for that I also apologize. I’m truly sorry for all the pain that I caused.

After all of this, all of the pain and uncertainty this situation has wrought, the real winners in the current fallout don’t appear to be Oberst or Harris. The real winners, as per discussions across the Internet, are men’s rights activists. Among the corners and crevices they have carved out for themselves, the message among the MRA movement is resounding: We won. Oberst’s defeat over Harris represents a victory for our entire community, against the oppressive regime of women everywhere.

What a sad song it is.

To be sure, you can’t help but feel at least somewhat bad for Oberst here. As an outspoken feminist, the guy likely has no wish to be associated with men’s rights activists, and this is a bad situation for him all around.

Nevertheless, Oberst’s handling of the incident isn’t without fault either. As Phoenix Tso at Jezebel pointed out, survivor advocacy group Right To Speak Out asked him to drop the lawsuit for fear that it would hurt other victims of sexual abuse and assault, and Oberst never responded to this request, seemingly unwilling to consider it. Tso notes that despite understanding Oberst’s decision to file said lawsuit, it could still have unfortunate results.

Perhaps Right to Speak Out decided to target this case because of the lawsuit’s inclusion of the alleged victim’s positive social media comments about Oberst? That information could be used to cast a suspicious light on an accuser’s decision to come forward with these accusations 10 years after the fact. When it comes to defending an accused rapist, it’s a classic move—and another high profile case that makes use of that strategy could intimidate victims from coming forward.

If Oberst’s career did in fact suffer because of Harris’ accusations, then a lawsuit wasn’t entirely an inappropriate move. Initial reports that Oberst was dropped from his label have since been proven false, but more than anything else, Harris’ story could have at the very least damaged his reputation.

But that’s also why the lawsuit felt so unnecessary. Oberst’s statement that he planned to “donate the proceeds of this suit to charities benefiting the victims of violence against women” is plenty noble. But Oberst shouldn’t have to get accused of rape to support these charities if this cause is important to him. Instead, if he really wanted to make a difference, he could’ve denied the accusations while expressing sympathy for survivors everywhere and decreeing the practice of victim-blaming.

What the lawsuit really comes off as is a rebuke of anyone who would ever suggest that someone like Conor Oberst could even think about committing rape, let alone actually go through with it. In short, it was about protecting his image.

In a recent profile for Spin, David Bevan characterized Oberst as the perfect antithesis of the masculine culture which rape is typically associated with. Bevan hypothesized, “For leagues of similarly awkward, sensitive, and self-serious teens, he became something of a poet laureate, providing high-stakes, turn-of-the-century bedroom anthems whose existential anguish and emotional drama could sound precious—if not ludicrously pretentious—to non-believers, adults in particular.”

And now, the MRA movement comes into play. By hoisting Oberst up as the epitome of a “nice guy,” as the kind of delicate soul who’s not only incapable of rape, but who personifies the tyranny of evil women, ready to accuse men just for fun, he’s being made into an icon. Granted, Oberst wouldn’t be the first person out there to become an icon for something he has no stake in, much less a desire to be tied to. But that doesn’t change the regrettable outcome. With Oberst as their hero, men’s rights activists now have a living, breathing, embodiment of everything they believe in, who they will surely continue to position as their savior, lest he makes a specific effort to cast them off.

The worst parts is that when men’s rights activists win, everybody else loses.

In a world where New York magazine can publish an unapologetically positive cover story on Terry Richardson, and Todd Akin can make claims about “legitimate rape,” propping up Faircloth (née Joan Elizabeth Harris) as a scapegoat is a dangerous act. The epidemic of sexual violence on America’s college campuses is proof of that alone. When numbers show that one in four women will be victims of sexual assault at some point in their lives, it hardly matters if Harris was telling the truth; for countless survivors out there, the horror is real.

Women don’t “cry rape” with any regularity, and to propose otherwise is offensive. Harris comes off like a person with some mental health issues, who at this point deserves to be left alone, despite the hurt she has caused for Oberst and actual survivors. She is the exception, not the rule, and to hold her accountable for the actions of anyone but herself would be abhorrent.

In trying to contextualize these events alongside modern rape culture, The Daily Beast’s Amanda Marcotte sums up the Oberst episode best.

Contrary to the common and ironically false accusations of anti-feminists, feminists don’t deny that false rape reports do happen. (It’s estimated that 2-8 percent of rape reports are false.) But even though there are false rape reports, that doesn’t mean that there’s any reason to believe men are in any real danger of having consensual sex with a woman, only to find her pointing fingers and yelling ‘rape’ afterwards… ‘I realize that my actions were wrong and could undermine the claims of actual sexual assault victims,’ Faircloth wrote in her apology, and sadly, there’s little doubt that this case will be used to bolster the myth that women are ‘crying rape’ because they regret having a consensual hook up. But this is more a tale about the unfortunate dangers of life in the public eye, and should not be used to perpetuate the myth that thousands of women who are raped by acquaintances every year are simply lying to distract from ‘regrettable’ sex.

As for Oberst’s future as an MRA icon, one can only hope that he thrusts away the title as soon as possible. Whether he handled his reactions and the following lawsuit appropriately or not, he still has a chance to come out on top if he proceeds with thoughtfulness and care where Harris and, more importantly, where real survivors are concerned.

Remember: Oberst is innocent, but many in his situation are not.

Photo via weeklydig/Flickr (CC BY 2.0)