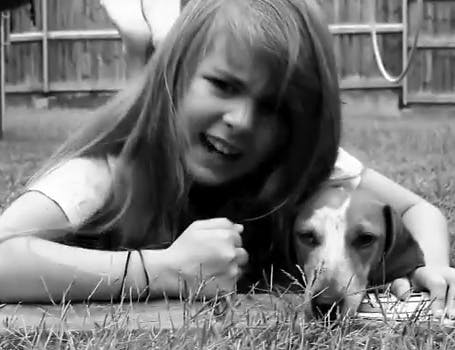 Coming soon to a Warped Tour stage near you: eight-year-old Juliet.

Juliet is not your average eight-year-old.

Her mother, keeper of the popular Tumblr Tina C. Photography, has been documenting the important Hallmark moments of her young life on YouTube: losing her tooth, finding out she’ll be a big sister, playing piano, and tasting her first Warhead.

And then there’s “My First Hardcore.”

You thought it was cute to watch a toddler cry for Iron Maiden? Wait until you see lil’ Juliet raging on her trampoline about her pet fish and  love for her dog, Robert.

“The Australian Hardcore scene will never be the same!” the video’s description proclaims. Judging from the reactions online, that’s probably true.

Since being uploaded to the Thetinexo channel  on Jan. 19, the 59-second video—written and produced by Rob Sharpe—has been viewed more than 60,000 times after landing on the front page of social news site Reddit, where users lauded the girl’s moshing techniques.

“her wind-milling and high-kick were also excellent during the breakdown. by age 10 she’ll be punching the floor like a pro,” wrote redditor beefinbed in a top comment.

By this time next year: Warped Tour.