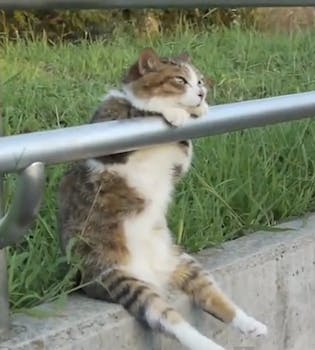 YouTube right now! The most relaxed cat in the world

This brown-and-white tabby appears to want nothing more than to sit and gaze at the sunset.

In a video uploaded this week, a cat sits upright, paws perched on a railing, facing the sunset. Set to calming piano music, the brown-and-white tabby appears to be thoroughly relaxed.

One commenter says the cat’s name is Nono-chan and is often seen hanging around in similar positions around her native Yokohama, Japan.

“If anyone lives in Yokohama , you may have chance to meet this cat, Nono-chan,” Tanukituki wrote. “The owner takes her to walk very often. Very popular among﻿ local kids for her unique traits. Youtube channel “kitcatn” have more videos of her hanging in a beautiful park.”

Others aren’t so sure the cat is having fun and speculate that a cruel owner tied her into an unusual position with string. Earlier this year, redditors speculated that a viral video of a frog sitting like a person was the result of animal cruelty. But not everyone is convinced.

“Have you ever tried to tie a string on a cat?” AngelaEAwesome wrote. “They will go crazy. My cat sits and sleeps in﻿ odd positions too.”

Based on other videos of Nono-chan frolicking around the park, it’s hard to imagine she’s an abused animal. Watch the video and see for yourself.