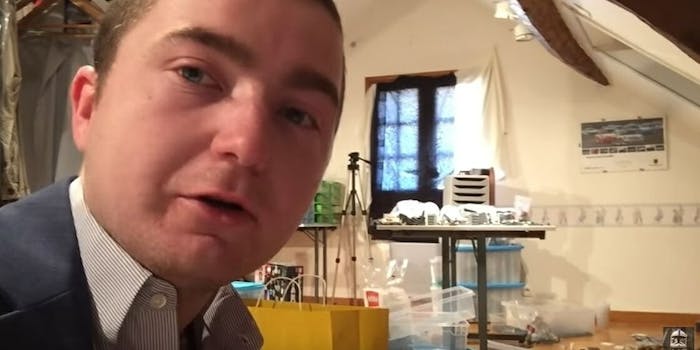 The internet is on a mission to replace what he loved.

YouTuber republicattak loves his Lego collection. You can see that in basically every vlog he posts, and his creations have given him so much joy since he started collecting the plastic blocks 14 years ago. But in a video posted to YouTube on Friday, titled simply “Bye,” it was clear his channel was falling apart after he revealed that his Lego collection, estimated at $18,000, had been ransacked and destroyed.

The video quickly went viral, piling up more than 600,000 page views as of this writing—most of his videos average between 50-200 page views per day, but he’s added about 13,000 new subscribers in the past few days, bringing his subscriber base to more than 18,000, according to Social Blade. And now, a GoFundMe has been set up to help him recover.

In the vlog, an emotional republicattak, who is on the verge of tears, said he had just returned home and discovered his collection (and his home) had been ransacked.

He continued, “I’m just stopping Legos. It’s been quite an adventure. … But now without lots of money, I can’t rebuild that. The bricks are gone. … I’m just stopping. I don’t know what I’m going to do … That’s it. It was an honor. Goodbye.”

According to his YouTube page, republicattak began collecting Lego bricks in 2004, and he began vlogging about them in 2010. In his video, the YouTuber clearly believes he was targeted for his Lego collection since he said nothing else from his home, including computers, was stolen.

As Mashable points out, Reddit picked up republicattak’s story, and that’s when it began going viral.

The internet’s outsized reaction has made the YouTuber feel a little better about the worst day of his life.

“I really felt alone when I discovered the robbery, and decided to make a video to express and ‘release’ myself to a handful of people knowing what it means… I’m really surprised by how compassionate you guys are and didn’t expected (sic) anything like that. I don’t know how to react,” he tweeted.

“Thank you very much everybody.”
This sentence is so poor in terms of words for the feeling I have right now… I don't know how to express my gratitude for your kind words and gestures.

May see exaggerated, but literally had the worst 24 hours of my life, and you just gave me the will to move forward. A fan as much as me, @MandRtweets set a crowdfunding for starting from a new base. Please DON'T if you're under 22 or have MOCs projects. https://t.co/fkcBlG8uqa

In the closing of what he said was his last video, republicattak said, “Be careful. There are some bastards out there.”

But as he’s found out in the past few days, there are also plenty of good people out there who want to help him rebuild everything he loved.