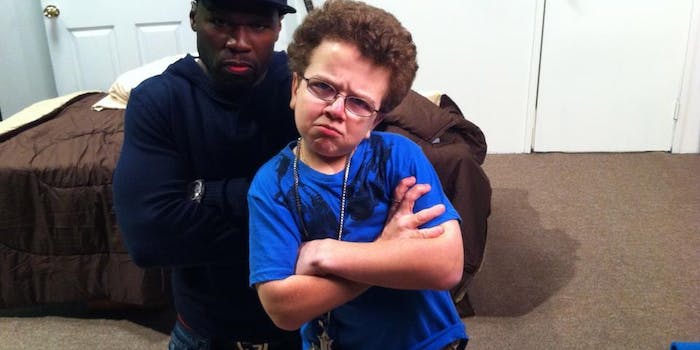 How a 16-year-old, known for lip dub videos, became the most unlikely pop star and tastemaker of 2011.

Keenan Cahill boasts the rare distinction of having both Tyra Banks and 50 Cent in his bedroom.

From his home in Elmhurst, Illinois, the 16-year-old became the most unlikely pop star and tastemaker of 2011 through his ubiquitous lip dub videos. The concept seems almost too simple to be true: Sitting in front a webcam, Cahill mouths the words to radio singles while dancing like Napoleon Dynamite.

Yet, Cahill’s managed to turn the routine into a miniature music empire—and it’s still expanding.

Since joining YouTube in October 2009, the videos on his official channel have clocked more than 350 million total views. That’s led to studio time with mega-producer David Guetta, sitting on Katy Perry’s lap, and bringing down the house at the 2011 American Music Awards on stage with LMFAO and David Hasselhoff

“I literally just did it all on my own,” reflects Cahill, his voice thin and wheezy, on his early inspiration. “I always wanted to be known by the people, to be in the public eye.

“I would pray to God every night—that out of all the people it happens to—to let it be me.”

“I heart you @KeenanCahill,” the pop star tweeted in response an early video of his, a tribute to “Teenage Dream,” in Sept. 2010. Within days, Cahill’s stats across social media skyrocketed. Soon after, the teen was invited soon after to appear on the “Chelsea Lately” show and collaborate with 50 Cent.

Part of Cahill’s initial appeal came from his inspiring back story. Since birth he’s suffered from Maroteaux–Lamy syndrome, a metabolic disorder that typically results in growth retardation, thickening of the dura, restricted joint movement, and occasionally, as is the case with Cahill—who’s 4′ 2″ tall—the appearance of dwarfism.

He’s had nine surgeries to date and undergoes weekly enzyme infusion therapy, according to ABC News.

“It’s not in the way,” offered Cahill on his condition. “I’m the same as everybody else.”

His unique appearance might have first caught viewers’ attention, but that’s not what continues to bring them back. He’s charming, kind, and creative—a relatable little brother figure that you want to watch succeed.

And Cahill’s perhaps the best example of brand-building on YouTube.

Over the last year, he’s become a fixture in pop culture: starring in a SmartWater commercial with Jennifer Aniston, appearing on America’s Next Top Model, cutting a Wynn-Encore Resort promo with Lil Jon in Las Vegas, and updating the New York Knicks’ theme song, to name just three notable collaborations. He even has his own clothing brand, Just Love Apparel, inspired by a lyric from Katy Perry’s “Teenage Dream.”

Given the strong correlation between his video tributes and single sales, Cahill’s endorsements have become a valuable commodity. Artists do occasionally pay for the high schooler’s service, which likely explains why he ended up at Nashville’s Grand Ol’ Opry with the Oak Ridge Boys.

But “it’s not as much as some think,” clarified Cahill, adding that he’s saving up for college.

Cahill’s not content with simply mimicking Top 40 hits, however. He wants to make them.

Along with starting a Web series, Keenan’s Crush, to showcase his acting skills, Cahill’s building a career in dance music. He’s been working with “some of Kanye West’s people” and Mayra Veronica, the dance pop star whose single, “Freak Like Me,” he covered in August.

“I know the videos aren’t going to last forever,” he continued. “That’s why I’m hoping that the music does well. One of the hardest things is that transition. The haters are hate, but if they’re true fans they’ll stick by it.”

For Cahill, the transition’s part of a larger goal: to always keep pushing forward.

“I’ve been through a lot in my life, but I don’t give up,” he said. “That’s basically my message. No one can say you can’t do something, because you can.

“Even if the doctor says you can’t because you’re lying in bed sick, there’s always a way to get out there.”