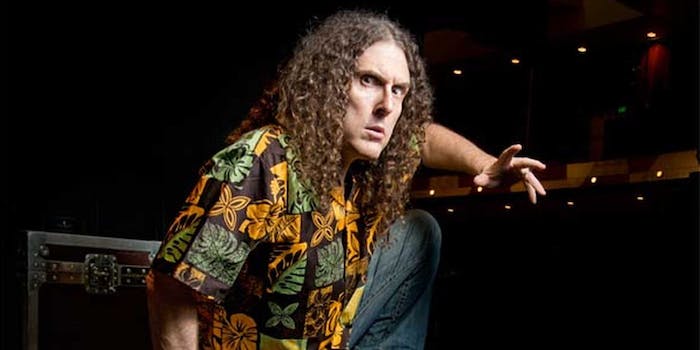 And it's everything Al fans hoped it would be.

“Weird Al” Yankovic is a world-renowned actor, author, comedian, and musician. Since the 1980s, he has been entertaining audiences with his parodies of hit songs, such as “Eat It” and “Amish Paradise.” He will also hunt you down if you turn around in his driveway without permission.

This fact was one of many revealed by Yankovic during a June 27 AMA (Ask Me Anything) session on Reddit. During the exchange, he opened the floor to almost all subject matter–with one small exception.

“Except about the movie Rampart, I will not talk about that,” he insisted, an obvious jab at Woody Harrelson’s disastrous attempt to market the film on Reddit in February 2012.

Like his music, Yankovic’s general correspondence with his fans was nothing short of hilarious. When presented with serious inquiries, however, he was quick to answer with a well-thought-out response.

What is one question that nobody has ever asked you in an interview, that you really really really wish someone would ask? (bernerbits)

“May I give you this box full of money?”

What’s the weirdest thing a fan has ever asked you? (wizarddray)

“What is your favorite leg?”

1.Any plans to return to channel 62 and do a follow up to the cult classic UHF?

3.Have you ever had someone request for you to parody their songs?

4.Do you have to pay artists that you parody?

5.Will AL-TV ever see a DVD release? Would it, even if the other artists’ songs were cut, or would you not like to release edited versions? (Alias28)

“1. No – I get asked that a lot, and it’s very flattering, but I think if people enjoyed UHF, I should just let them keep their fond memories of it and not do UHF The Next Generation.

3. Yes – out of respect for them I won’t mention any names, but it’s happened a few times.

4. Not up front, but they get royalties.

5. There would be way too many legal clearances necessary for a retail release – so feel free to nab copies from friends or off the Internet.”

Back in 1997, I was a senior in high school on Long Island and a bit on the nerdy and shy side. I was also a BIG fan of yours, and I thought about how much fun the prom would be if you took me. I wanted to write and ask you, but feared your rejection, which I didn’t think I could handle.

As a more mature woman in my 30s who can better handle rejection now…would you have gone to prom with me? (Neo_Unicorn)

“Totally! It would have been awesome! Man, I’d hate to live with the kind of regret that YOU’RE probably feeling right about now! Whew!”

So what had you learned from your “Internet Leaks” experiment? Will you be doing so again for the new album? (happysteve)

“Internet Leaks” served a few purposes – it allowed fans to enjoy 5 of my songs a couple years before the full album came out, and it allowed me to play those songs in my live show, and it even got me an extra Grammy nomination! But I’m not inclined to do it again, because when Alpocalypse finally did come out, a number of fans groused that they were disappointed because they’d heard half the album already. So ultimately, I think I’d like my next album to be perceived as all new material when it comes out in 2019.”

How should I spend this Saturday? (phyllodactylus)

“Pondering your mortality and eating Doritos.”