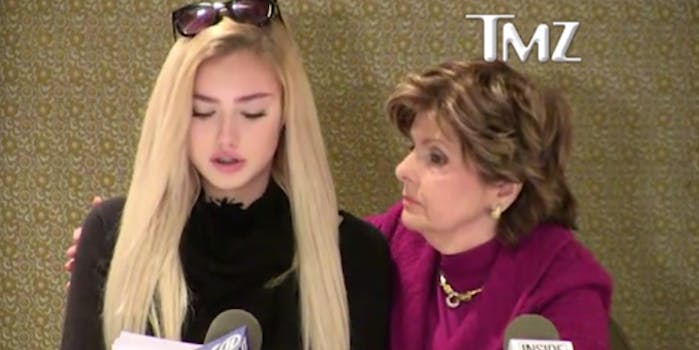 Teen outed by magazine for Tyga Instagram messages speaks out

'I don't want what happened to me to happen to any other young girl.'

Remember when Tyga and Kylie Jenner briefly broke up and then immediately got back together? OK! Magazine ran a cover story in December claiming the split was caused by inappropriate conversations the 26-year-old rapper had been having with a teenage girl via Instagram direct messages.

The magazine omitted the girl’s name, phone number, and face from all of the screenshots and photos it ran, but it seems that people were able to figure out who she was anyway.

On Monday 14-year-old Molly O’Malia held a press conference in New York City to address the story. The high school freshman said that the negative attention drove her to come forward and clear her name. Sitting alongside lawyer Gloria Allred, who is also representing the women who accused Bill Cosby of sexual assault, O’Malia read the following from a prepared statement:

Even though [OK!] pixelated my face and did not use my name, a lot of people could tell it was me. I never sent the communication to OK! Magazine, and I don’t know how they obtained it… [they] never even contacted my mom or me to check the facts to see if what they were publishing was true. I’m speaking out today because I don’t want what happened to me to happen to any other young girl.

The conference was livestreamed on TMZ, and allowed O’Malia to present her side of the story. Basically: Tyga slid into her DMs, complimenting her appearance and asking if she’d ever been to Los Angeles. Since O’Malia is an aspiring singer and model, she thought this might be a big break for her career. It wasn’t until Tyga repeatedly asked her to FaceTime that she started to get weirded out.

Allred asked for a formal apology from OK!, who ran quotes from O’Malia’s high school classmates stating that “she’s clearly enjoying” the attention, and that she finds the entire situation “exciting.” Allred claims that OK! running a story that places an underage girl in the middle of a sex scandal portrays her “in a completely false light” and exploits a minor.

This isn’t Tyga’s first time being accused of social media weirdness and soliciting underage girls. Earlier this year he had a cheating and dick pic-related scandal (NSFW), and he famously dated Jenner long before her 18th birthday. He officially came out as her boyfriend at her birthday party in August, where he gave her a Ferrari.