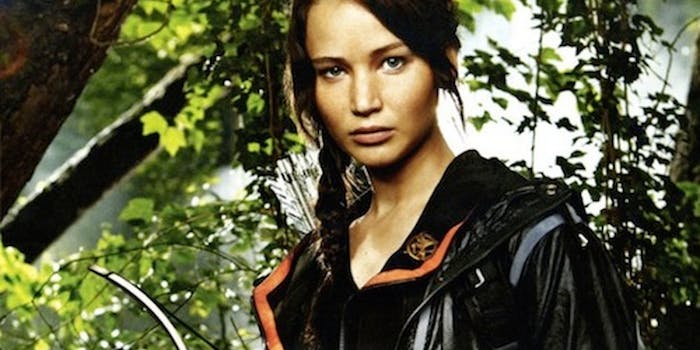 Become a mayor in “The Hunger Games”

A mysterious hashtag at the end of the film trailer for The Hunger Games marks only the beginning of one of the most interactive and creative marketing promotions to date.

Do you think you have what it takes to be a mayor of one of the 12 districts in The Hunger Games?

On Monday, Lionsgate, the film’s producer, tipped viewers off to an ambitious viral marketing campaign. At the end of the film’s teaser video, many astute viewers noticed the hashtag #whatsmydistrict tucked in the corner.

A quick Twitter or Facebook search leads to a “secret” website, The Capitol PN: The Official Government of Panem. For those who haven’t read the book, Panem is the dystopian future society where The Hunger Games takes place. The fictional country is divided into 12 districts, each one associated with its primary export. For example, District 12 is Mining.

From there, the website invites people to connect with a Facebook or Twitter profile to be sorted into one of the districts. (This reporter ended up in District 10: Livestock.)

That’s easy enough but to obtain real perks, users have to get spammy. Each citizen of Panem gets a Capitol TV video with a unique URL. Whoever shares their link the most gets to become “mayor” of their district on Facebook, complete with exclusive news and prizes.

That’s part of what makes the campaign so impressive and successful. Lionsgate is creating incentive for users to become actively involved. In those, those fans are granted control of the the district’s Facebook pages and accounts.

However, vital information about the campaign is still unfolding. Hunger Games fans must rely on theTwitter and Facebook networks in order to keep abreast of what’s next. In fact, @TheCapitolPN, the campaign’s user profile, will share new information only after enough people have made the previous tidbit satisfactorily viral.

Some have already noticed that the first mysterious hashtag on the trailer, #wheresmydistrict, has been replaced with a new one: #headforthesquare. Fans who are familiar with the book know that “The Reaping”—in which children are chosen to duel to the death—occurs in the district square, and tension is mounting.

While Lionsgate has made it intentionally difficult to figure out the details of the campaign, one thing is clear: It takes a lot of manpower to keep an audience’s attention these days. The campaign took on 12 grateful Twitter followers (for District 10, the volunteer is @MeganScott), to serve as “recruiters” and help update each of the 12 district pages every hour.

The work is paying off in page views. The CapitolPN now has 11,000 followers on both its Twitter and Facebook accounts.