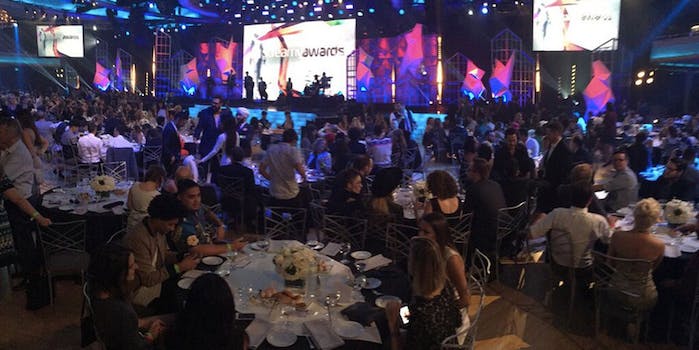 And the winners of the 2015 Streamy Awards are…

In a night that was dubbed a #TeamInternet takeover by consummate hosts Tyler Oakley and Grace Helbig, the worlds of digital and mainstream melded in a major step forward for the world of online. The two biggest awards of the night, Entertainer of the Year and Show of the Year, went to Cameron Dallas and fouseyTube, respectively.

“I’m running for president in 2020,” joked Yousef Saleh Erakat, aka fouseyTube, after a more somber moment discussing mental illness and addiction in his acceptance speech. “What up, Kanye.”

While 35 awards were handed out earlier in the week at a reception at YouTube Space L.A., nine more awards made the main show, including Lilly Singh’s win for First Person channel and Gigi Gorgeous’s win for Beauty. Singh, who’s one of the new faces of YouTube’s advertising campaign, had nothing but praise for YouTube and Google in her acceptance speech, saying she’s glad they’re “not scared to put a brown girl on a billboard.”

The event marked the first time the Streamys were televised, with the 90-minute show airing live on VH1 as well as streaming online. The biggest breakout successes of the night’s more highly organized television show proceedings were the video packages that preceded each award. The Streamys tapped various digital creators to put their own spin on the moments, which led to beauty vlogger Kandee Johnson transforming herself into nominees for First Person Series and Honest Trailers giving a new take on a category. This, coupled with the tight time restrictions of live TV, gave the evening a definition and flow that had been somewhat lax in years past when it was just a self-contained ballroom.

That’s not to say attendees were not relaxed. During commercials they flooded the bars (winner Flula was spotted paying for his own drinks, despite having a shiny Streamy in hand) and mingled, and the crew from Video Game High School were up on their feet for every musical guest. With the addition of a television audience came big-production numbers from musical guests including Hailee Steinfeld, Future, and OMI. While they were flashy and impressive, they were relatively disconnected from the YouTube space as a whole, despite efforts from the organizers to include digital elements. The night closed with Sir Mix-a-Lot, the first and only performer or presenter that prompted an older usher to lean over and ask the press table who was on stage at that moment. For all the shine of digital media, sometimes you just want to know who got much back.