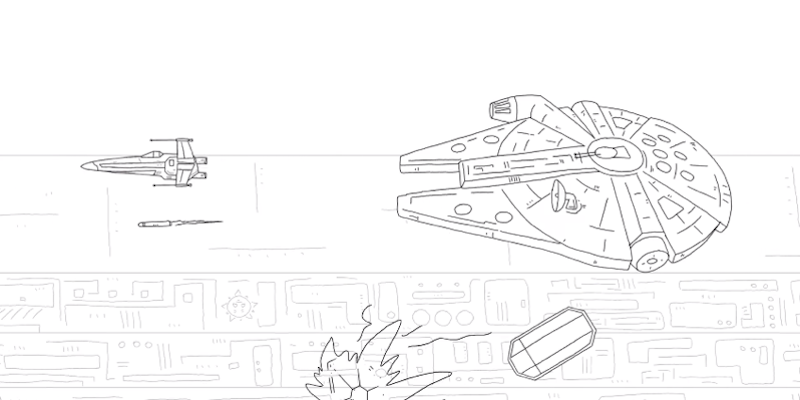 Done in 60 seconds: Speedrun your way through popular movies

Simplify your moviewatching experience with these minutelong versions of Star Wars, The Matrix, and Back to the Future.

Do you find yourself wanting to re-watch Star Wars Episode IV: A New Hope but lacking the two hours in which to do so?

Fortunately, you can now watch the epic film—and a few other popular movies—in a single minute.

This xkcd-style reimagining of George Lucas’ crown jewel runs down the whole plot of the saga’s fourth chapter in under 12 parsecs. The capture of Princess Leia’s ship in the opening scene, for example, which takes roughly four years to happen in the actual film, occurs almost instantaneously. Alderaan is destroyed without time for those million voices to cry out in terror. The drawn-out battle scene that destroys the Death Star and closes the movie is reduced to mere seconds.

While very economical in terms of invested time, the video sadly doesn’t bring us any closer to an answer of whether Han shot first.

The minutelong version of Star Wars Episode IV: A New Hope is the latest in the Speedrun series of videos on YouTube. Speedrun, still in its infancy, is a product of Russian animation company 1A4 STUDIO, and uses original artwork and animation to recreate well-known movies in 60 seconds. No fluff, no filler, no pesky opening credits: just continuous action that drives the story in 1/120th of the time.

You could watch the entire Star Wars saga in five minutes—assuming you’d still want to skip The Phantom Menace, as it isn’t worth even a minute of your time.

To date, two other Speedrun videos have been produced.

The Speedrun version of Back to the Future chronicles the adventures of Marty McFly and Doc Brown at a speed that feels a lot faster than 88 mph. McFly goes from loser teenager to musical legend in exactly a minute’s time, something that has only ever been done in Saved by the Bell reruns.

The Speedrun version of The Matrix takes the red pill. Neo flies through the various glitches of the Matrix with little problem aside from his weak stomach—but in 60 seconds, there’s no time for dodging showy slow-motion bullets.

There is no word on whether or not 1A4 STUDIO plans to do other movies in the Speedrun format, like the obvious choice of Gone in Sixty Seconds.