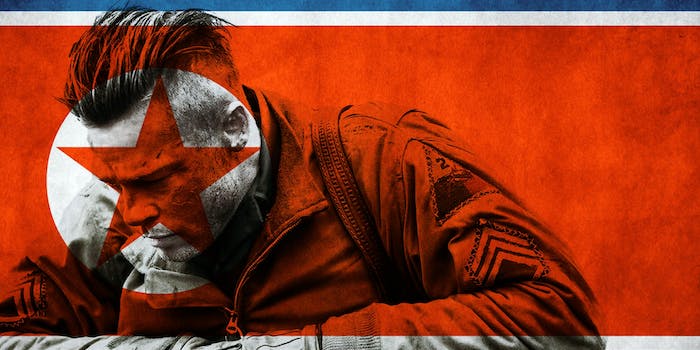 Some believe North Korea is behind the attack.

DVD screeners for at least five new Sony movies have leaked online and downloaded millions of times following a serious hack targeting the studio, Variety reports. Some believe North Korea is behind the attack.

Annie, Still Alice, Mr. Turner, and To Write Love on Her Arms have all been leaked ahead of their official cinematic release dates—but it’s Fury, starring Brad Pitt, that has proved most popular among pirates. Figures dating from Nov. 11 indicate the screener has been downloaded more than 1.2 million times.

The leak is part of a broader attack on Sony that saw the company’s website defaced by a group calling itself “Guardians of Peace” (#GOP). “Warning: We’ve already warned you, and this is just the beginning,” the message said. “We have obtained all your internal data including secrets and top secrets.”

The hack so seriously affected Sony’s computer systems that employees were forced to use pen and paper to work, Re/code reported.

It’s unclear who is behind #GOP—but one of the more surprising theories being bandied around is hackers connected to North Korea. The authoritarian peninsula state has expressed outrage over Sony film The Interview (which is about an assassination attempt on the country’s president), describing it as an “evil act of provocation.”

Re/code is reporting that security consultants working on behalf of Sony are “actively exploring the theory” that the hack may have been led by “third parties operating out of China on North Korea’s behalf.”

Sony is, for now, staying mum on who it believes the culprits are, telling Variety only that “the theft of Sony Pictures Entertainment content is a criminal matter, and we are working closely with law enforcement to address it.”