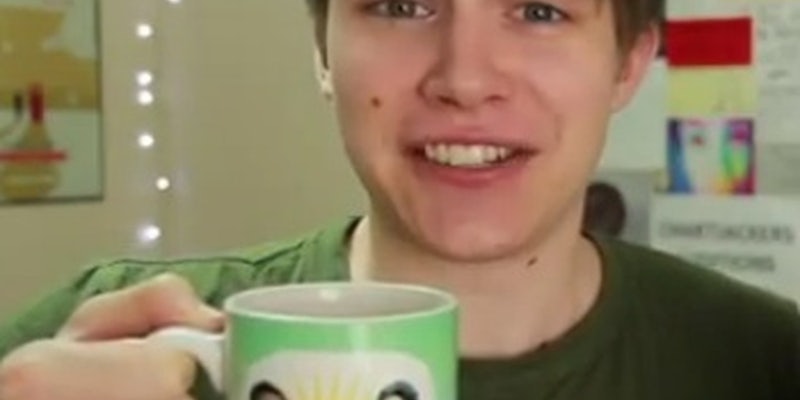 Seven tips on how to avoid being a YouTube douchebag

McDonnell has been on the video-sharing site for 5 years now, making him, as he calls it, a “YouTube old fogie.” In that time, he has amassed 1.5 million subscribers and more than 232 million views on his 156 videos.

McDonnell, along with his accent, is easily the top YouTube teen and tween heartthrob on the video-sharing site. McDonnell’s massive (hormonal) fanbase loves him so much, they even write Tumblr fanfiction—sometimes angsty, sometimes sexual—about him.

McDonnell’s way with the ladies isn’t the only reason he has very few enemies on the video-sharing site; his body of work and YouTube demeanor is, well, extraordinarily considerate.

The following are his seven “personal rules for YouTube,” which the Daily Dot affectionately calls the “seven tips on how to avoid being a YouTube douchebag.” (The seven tips are in two–part video form, but the Daily Dot has transcribed the most important bits)

1) “I don’t ever tell people to like, comment, subscribe—any of that stuff—unless I actually have a decent reason to,” says McDonnell.

He calls such antics a “waste of time,” because “if you do genuinely like [a video], you will ‘like’ it, … I don’t need to tell you to do that.”

“Thats why [I] stopped watching shaycarl, rwj, shane, smosh soooooo many﻿ more,” wrote SourMangoLove. “I hate when they act desperate for hits and things, it can really take the fun out of it.”

2) “I don’t like to give [fans] who watch me on the Internet any kind of group name or title,” says McDonnell, who just wants to talk to you, “you, a real person, on the other side of this camera.”

McDonnell is referring to the popular practice of YouTube celebrities naming their fanbases things like “nerdfighters” (Vlog Brothers) or “the nation” (Philip DeFranco).

McDonnell says his personal favorite YouTuber is Wheezy Waiter, who calls his fanbase “beard-lovers,” which always makes McDonnell pause “because, I don’t love beards, I just like his videos.”

To each his or her own, though.

“I personally love the group names,” writes YouTuber bluemoonicecream22. “For example I love being in the “Audience” being a “Moosher” A Nationeer, Part of the Fizzy Family, a “Burry”,﻿ a “nerdfighter”, a “beardlover”, “a mythical beast,” etc.”

3) McDonnell says he makes videos for himself, and his “personal satisfaction is at the top of my list.” “If other people like them, well, that’s really lovely.”

McDonnell worries that now that his hobby has become his job, he will lose interest in video production. But he combats that feeling “by making it as fun as I possibly can for myself.”

The last thing he wants to do is “pander to some specific audience.”

4) “I don’t like to overuse annotations. In fact, if I can avoid it I try not to use them at all.”

McDonnell describes being “inundated with colorful boxes everywhere” as “really annoying,” adding that they detract from the viewing experience.

“These rules makes you the best youtuber!﻿,” writes Ricksy19.

5) McDonnell stresses the importance of making the title and picture of each of his videos “a good representation of what the video is actually about.”

He adds, there’s no point in misleading viewers, because once they figure out what they’re watching isn’t what they wanted, they’ll “just leave,” as he does himself.

6) McDonnell promises to “only take a business opportunity [as in, join a network such as Revision3 or Machinima] if it makes my videos better.”

Or, if it leads to a new experience, he adds.

7) “If you have a schedule, do it for your own benefit” says McDonnell.

YouTube, as noted by McDonnell, recommends adopting a strict schedule for regular content, but McDonnell admits a rigid schedule “makes me feel less creative.” However, he adds, “having the right kind of schedule can encourage creativity as well.”