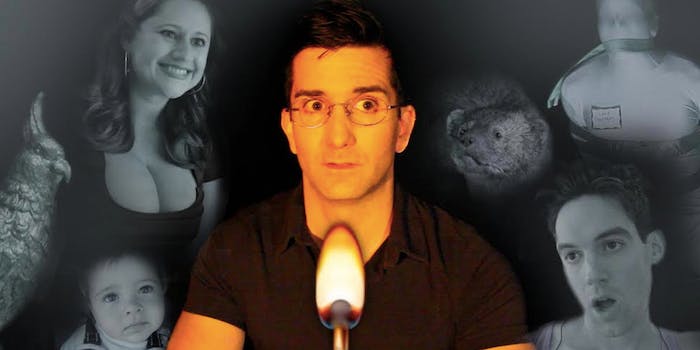 Presented for the approval of the Midnight Society, it's the tale of "That Guy From That Show."

Don’t ask Ross Hull if he’s afraid of the dark.

Hull spent 10 years, from 1990 to 2000, as the most recognizable face of Nickelodeon cult hit Are You Afraid of the Dark?. With his circular glasses, dark hair, and tales of impossible situations, he was Harry Potter before the British icon sat on a broom. Now, 14 years since he left the campfire behind, Hull returns for a cheeky look at what it’s like to be a former teen star recognized as “that guy from that show.”

“We get Gary back to the campfire to tell a story,” Hull told the Daily Dot. “It’s not recreating an episode from the ’90s, but it takes some flavors from it, and we’re having a bit of fun. It’s tongue-in-cheek. It’s one of those things where we had a lot of fun doing it, but it’s been a lot of work. It’s not our full-time job. I hope people enjoy it; I enjoyed the experience, for sure.”

In the video, Hull encounters all forms of adoring, angry, and and downright desperate fans in the video, from a mother furious over all the nightmares his show produced to a gym mate who thinks he probably saw Hull at a bathhouse and a waitress who clearly had a sexual awakening to Hull in the ’90s (for those wondering, he lets the ladies know that he doesn’t swing their way, but begrudgingly signs their chests like a good sport).

Hull previously produced a 13-minute documentary about his experiences with the nostalgia junkies of Nickelodeon fandom at a 2013 meet and greet panel at the 92nd Street Y in New York. Hull said he was impressed and shocked by how invested the fans were in the show, which he recalls was shot 13 episodes at a time over a span of two to three weeks on set.

“It was funny because for this project I had to look back, and it was like I was watching for the first time,” he said. “You don’t remember a cast member leaving, or plot twists. It’s pretty unbelievable how passionate fans are, and what they remember and what details they remember, and the questions they have. Like, ‘Was Tucker your half brother or whole brother?’ I think the guy had dark hair and dark eyes and is a good actor, the casting director went, ‘let’s cast this guy as Gary’s brother!’

“When you’re part of something, sometimes you don’t view it in the same way as being a fan,” Hull continued. “I have to say that now, this many years later, I’m appreciating the show and seeing it through other people’s eyes. All these stories about the viewing experience they had Saturday night on Nickelodeon watching the show—it makes me go, ‘Wow, I have to go back and look at this show in a different light as well.’”

After his teenage TV fame on Nickelodeon, Hull continued to act for a while, including a stint on Canadian teen show Student Bodies. Eventually, however, he shifted gears for a different life in front of the camera. Hull is now a meteorologist on Canadian TV, a career he started 10 years ago.

“People were really shocked the first time they saw me do the weather in Canada,” he said. “I always had a passion for broadcasting; I’d bug my family doing fake newscasts as a kid. It became this second career for me. [With the YouTube account,] I wanted to get back into doing some creative stuff, and this was sort of the entry into doing it. I think I’m comfortable enough at this point that I have the meteorology career: When I was starting on meteorology, I wanted to put that stuff behind me to be taken seriously as a broadcaster, but I’m comfortable now.”

Hull says he really enjoyed the creative process of creating his most recent homage to Are You Afraid of the Dark? and wants to keep the door open for more creative projects.

“I’m open to suggestions, and if fans see the episode and have any ideas, we’re certainly open to that,” Hull said. “What we love about this is we’re able to create content and direct it towards people who are into it, fans of the show and so on, and that’s what we want to keep doing. We have a few ideas, but we’ll see what happens.”

Meanwhile, fans can hit their nostalgia quota by devouring every single episode of the series on YouTube.