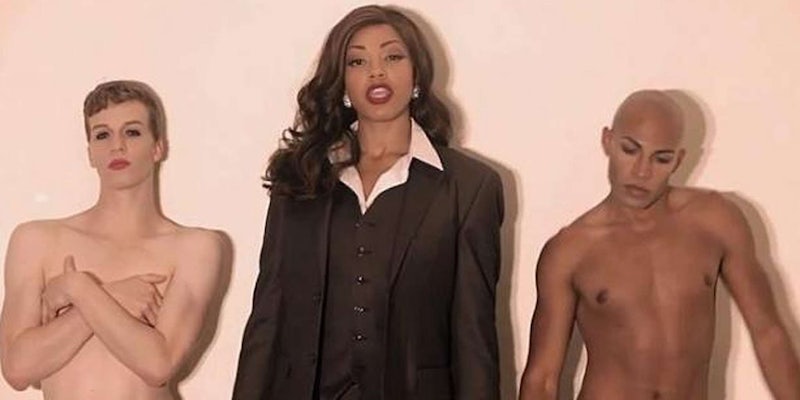 It's the boys' turn to get objectified.

The video for Robin Thicke’s recent single “Blurred Lines” is undeniably attractive. The beat, the hook, the melody. The half-naked models. The latter is the reason why a NSFW tag has followed the video around the Internet, ensuring people will be curious enough to click. It was banned on YouTube, but a clean version does exist.

Beyond the presence of several topless women in the clip, the lyrics raised some eyebrows, namely the refrain, “I know you want it.” Thicke has been accused of promoting rape culture with the video, and objectifying women. Even the title could be misconstrued. Thicke commented on the controversy, and what he was trying to convey: that “women and their bodies are beautiful.”

With that in mind, Seattle “boylesque” troupe Mod Carousel blurred the lines even more, and flipped the gender roles for this new version.

In their reality, the women are the ones giving eyes and catcalling, and “I know you like it” holds a  different context when Caela Bailey sings it. The Mod Carousel boys assume the roles of the scantily-clad models. Their mission statement:

“It’s our opinion that most attempts to show female objectification in the media by swapping the genders serve more to ridicule the male body than to highlight the extent to which women get objectified and does everyone a disservice. We made this video specifically to show a spectrum of sexuality as well as present both women and men in a positive light, one where objectifying men is more than alright and where women can be strong and sexy without negative repercussions.”