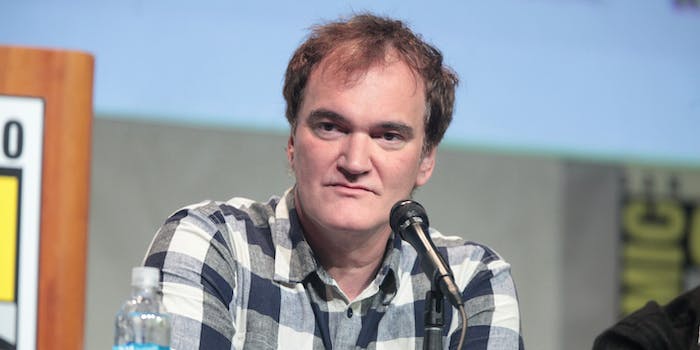 'It’s the biggest regret of my life, getting her to do that stunt.'

In a New York Times report published over the weekend, Uma Thurman revealed that she received permanent injuries after crashing a car she didn’t feel comfortable driving while filming Kill Bill. Director Quentin Tarantino is now disputing some of the details in the article.

In a lengthy Q&A with Deadline, Tarantino called having Thurman film the scene “the biggest regret of my life.” He knew that the article was on its way—and even helped Thurman obtain the footage used in the article—but didn’t expect the response to it and put most of the blame on Maureen Dowd, who wrote the article.

Tarantino framed the day of the on-set car crash differently than Thurman did and denied that he had gotten angry with her, though he might have gotten annoyed by her trepidation. He had tested the car and the route she was supposed to drive that day and told her it was safe.

“I’m sure when it was brought up to me, that I rolled my eyes and was irritated,” Tarantino said. “But I’m sure I wasn’t in a rage and I wasn’t livid. I didn’t go barging into Uma’s trailer, screaming at her to get into the car.”

The route was eventually changed because the sun was starting to set. The road, now in the opposite direction Tarantino had tested, included a curve, which is seen in the footage released by Thurman.

Tarantino had a role in helping Thurman obtain the footage from the car crash that accompanied the New York Times article, something she had attempted to do for years. Thurman posted the footage to Instagram hours before Tarantino’s interview was published.

“Quentin Tarantino, was deeply regretful and remains remorseful about this sorry event, and gave me the footage years later so i could expose it and let it see the light of day, regardless of it most likely being an event for which justice will never be possible,” Thurman wrote on Instagram. “he also did so with full knowledge it could cause him personal harm, and i am proud of him for doing the right thing and for his courage.”

i post this clip to memorialize it’s full exposure in the nyt by Maureen Dowd. the circumstances of this event were negligent to the point of criminality. i do not believe though with malicious intent. Quentin Tarantino, was deeply regretful and remains remorseful about this sorry event, and gave me the footage years later so i could expose it and let it see the light of day, regardless of it most likely being an event for which justice will never be possible. he also did so with full knowledge it could cause him personal harm, and i am proud of him for doing the right thing and for his courage. THE COVER UP after the fact is UNFORGIVABLE. for this i hold Lawrence Bender, E. Bennett Walsh, and the notorious Harvey Weinstein solely responsible. they lied, destroyed evidence, and continue to lie about the permanent harm they caused and then chose to suppress. the cover up did have malicious intent, and shame on these three for all eternity. CAA never sent anyone to Mexico. i hope they look after other clients more respectfully if they in fact want to do the job for which they take money with any decency.

Tarantino also defended his choice to film himself spitting and choking Thurman in two separate scenes, which Dowd mentioned in the article. He said that he didn’t trust the actor whose character was supposed to spit on Thurman and said that it was Thurman’s idea to have Tarantino choke her. He added that “I couldn’t have respected Uma more during the making of” Kill Bill.

Tarantino had done the interview to clarify what he believed were misconceptions about how the New York Times presented events. But the sympathetic coverage given to him by Deadline drew criticism.

Like fucking spiting on an actresses face and choking her wasn't enough. Fuck this guy. Fuck anyone who works with him. I'm embarrassed that I ever auditioned for him. Fuck him.

Via Uma Thurman's Instragram. Tarantino obviously still deserves the criticism he got. That said, this makes me wish even more that the story had been given to a real reporter who would've clarified all of this. pic.twitter.com/5UEO2UIE5r

tarantino LITERALLY refers to the car accident as the "biggest regret" of his life in the intro & by the end it's reduced back down to "car stuff" … it's p clear how much responsibility he actually feels (0.08%) pic.twitter.com/kwHeTZAmEQ

Quentin Tarantino’s limp defense for choking Uma Thurman on camera—he wouldn’t “trust” a trained actor to do it—speaks to who he really is. Don’t mistake his longwinded answers for thoughtful reflections on his behavior. https://t.co/rrjqQ8od3P

“He didn’t rape a 13-year-old. It was statutory rape… he had sex with a minor,” Tarantino said. “That’s not rape. To me, when you use the word rape, you’re talking about violent, throwing them down—it’s like one of the most violent crimes in the world. You can’t throw the word rape around. It’s like throwing the word ‘racist’ around. It doesn’t apply to everything people use it for.”