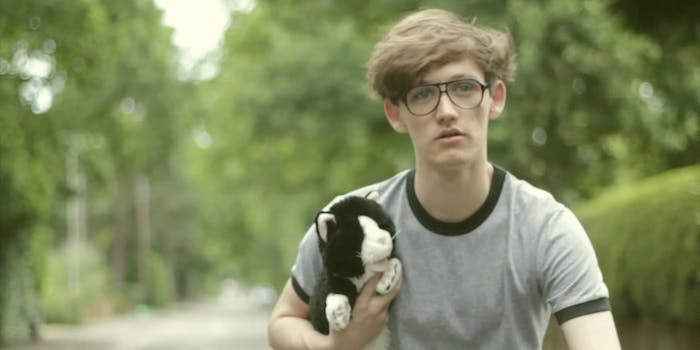 Meet Pleasant Ryan, the most lovably lonely man on YouTube

One of the major perks of my job is I get to watch hundreds upon hundreds of YouTube videos a week; I take in tag videos, book reviews, and makeup tutorials like Los Angeles takes in dreams. And over time, I’ve developed a long list of favorite creators but none quite measure up to O’Connor and his character Pleasant Ryan.

While O’Connor joined YouTube long before the April 29, 2012, date stamp on his YouTube channel, he decided to delete his previous comedy videos in order to keep the channel consistent with the Pleasant Ryan character—the most lovably lonely man on YouTube.

To sum up the life of Pleasant Ryan (not to be confused with O’Connor himself): His days are spent talking to cacti about love, contemplating death with a stuffed cat, and conducting the most obscure interviews with friends such as Bertie Gilbert and Ben Cook.

“I never really thought of it as a character until recently people started going, ‘That’s a character, Ryan; that’s not you,’” O’Connor says. “I just thought it was a side of me, but then I realized some of the things are a bit ridiculous. Some people relate to those other spectrums of the extremity of his situation. When he’s lonely, people go, ‘Oh, I’ve been lonely.’”

O’Connor became interested in film after completing his first memorable video, “The Really Random Movie” when he was 10. Though the movie has yet to hit the silver screen—any day now, Ryan!—it inspired him to continue pursuing film, both in school and recreationally. Now 20 years old, O’Connor is set to attend the University of the Creative Arts outside of London.

“I don’t really want to go into the film industry,” he says. “I just think I’d just get lost. I’d probably get crushed.”

The statement seems hard to believe, though, especially coming from someone who writes, directs, and produces his own content.

“I prefer being behind the camera. It’s just a lot easier,” confides O’Connor. “The trouble is I feel like I have to be in my own stuff, so I don’t really get the opportunity to work behind the camera. … It’s not like I don’t want to be in front of the camera—I don’t mind it—but I just prefer being behind. It also depends what I’m doing as well. It’s only really the ‘short film-y’ videos where I would prefer that.”

O’Connor says his creative inspirations come in waves: He spends most days staring at a blank Word doc waiting for the words to hit him.

“For some reason, videos don’t come out very often. I just don’t have an idea. I’ll sit there like a slug waiting for something to hit me,” he explains, his 5’11″ frame rocking back and forth on the floor of his parents’ house. “If I could make a video every week, I would. I just can’t physically think of an idea.”

But O’Connor’s channel is the epitome of quality over quantity: It’s easily apparent that with each video, O’Connor is bringing a higher production value and original style of storytelling to the platform.

Listening to O’Connor question the principles of age and the culture of YouTube, it’s easy to forget his youth. “20 years old, it’s too old. I thought I was going to stay 19 forever,” O’Connor laments.

But then there are moments, like his proclamations of love for fellow YouTuber Zoella and his constant fidgeting with his side-swept hair, that remind us there is a 20-year-old boy in there somewhere. And that 20-year-old boy is making the landscape of YouTube a little more pleasant—in the most obscure way possible, of course.