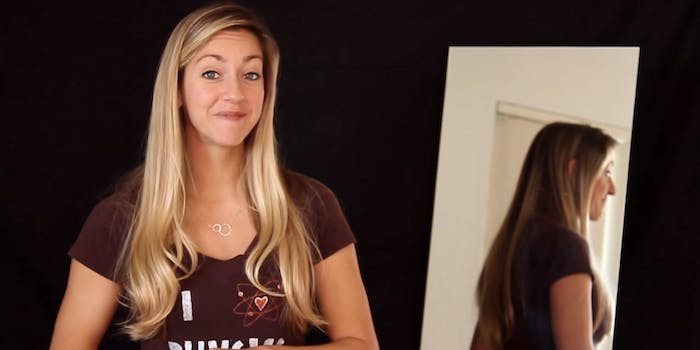 Dianna Cowern, known on YouTube as Physics Girl, has done the impossible: made physics interesting and accessible to the general public. And if I—a double humanities major who normally avoids physics like a New Yorker avoids making eye contact—can say that, you know it’s true.

At first glance, Cowern breaks every stereotype I previously had of physics enthusiasts. With flowing blond hair, an affinity for sandals, and a contagious charisma, Cowern has an enthusiasm for the subject that makes her an incredible addition to the education community on YouTube. After joining the University of California, San Diego (UCSD) faculty as a Science Outreach Coordinator, Cowern started making videos under the name “Physics Girl” in the hopes of sharing science knowledge in a fun and entertaining way.Cowern is an interesting study herself. Born in New Hampshire, Cowern grew up in Hawaii before setting out for MIT, where she graduated with a B.S. in physics in 2011. Following college, she spent six months completing an Astronomy Research Fellowship at Harvard University before shifting gears and heading back to San Diego.

It is my personal theory that while the rest of the world has 24 hours in a day, Cowern has 36. That’s the only way to explain this timeline of extraordinary achievements and her superhero status.

While her channel has been around for a couple years, it didn’t start gaining real traction until 11 months ago. Since then, she’s had viral hits and collaborated with huge YouTube heavyweights such as Veritasium (2.2 million subscribers).There are many things that make Cowern truly special. For one, she plans, writes, films, produces, and edits all of her own content. And like Emily Graslie and Vanessa from Braincraft, she’s changing the way viewers approach and enjoy education. Physics is an incredibly daunting subject, but that’s where Cowern steps in, explaining how physics affects your everyday life. With sexism still so prevalent in the STEM fields, Cowern is an incredible ally and role model for women to have access to.

By building a career out of what she loves, Cowern has shown young viewers—especially young female viewers—that it’s OK to not only pursue science, but to rock it.

Correction 1:56pm, Aug. 16, 2017: A previous version of this profile included a line about Cowern’s youth in Hawaii that was originally written as a joke on a UCSD site. The account of her early years has been corrected to reflect she was born in New Hampshire and raised in Hawaii.