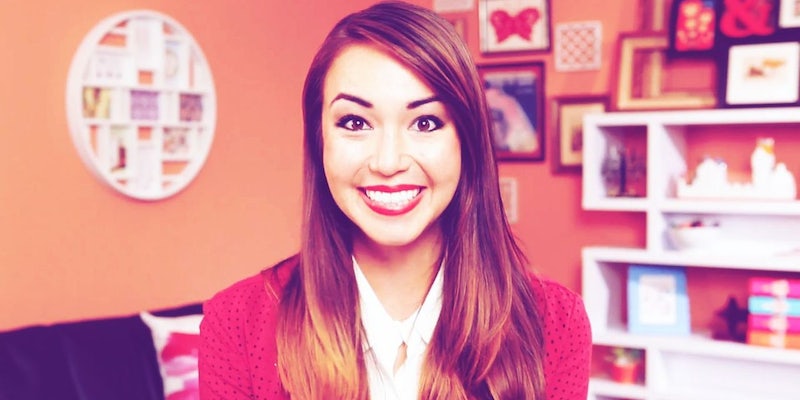 Jane Austen’s classic novel of small-town social intrigue gets an update by turning the eponymous Emma into a “lifestyle industry” matchmaker whose dream is to be bigger than Oprah.

It’s been a charmed year for the crew over at Pemberley, named after the iconic mansion in Jane Austen’s Pride and Prejudice, the inspiration for the Diaries. Not only did they win an Emmy for Lizzie Bennet, but their summer Kickstarter to produce a DVD earned nearly $500,000. Not bad for fans of a 200-year-old story. And yesterday, the company behind the beloved vlog-format transmedia story debuted its much-anticipated new series—and perhaps its riskiest one yet—Emma Approved.

Like its predecessor, Emma Approved reworks an Austen novel. In Lizzie Bennet, iconic heroine Elizabeth Bennet became a grad student and vlogger, and her foil Mr. Darcy a high-powered hipster. Now, in Emma Approved, Jane Austen’s classic novel of small-town social intrigue gets an update by turning the eponymous Emma into a “lifestyle industry” matchmaker whose dream is to be bigger than Oprah.

Emma Approved follows Lizzie Bennet and its short summer follow-up Sanditon by utilizing a variety of video, webcam footage, and multimedia tools, all sleekly edited into a compact short-form series. But already there are a few major differences. For one thing, the heroine of Emma isn’t always easy to like, and the new Emma, played by Joanna Sotomura, may rub some viewers the wrong way with her chipper Martha Stewart-ish approach to matchmaking. But as fans of the story know, things are only just beginning for Emma.

Another big change is that instead of making viewers wait through half the series before getting to see the face of one of its most important characters, Emma Approved introduces you to both series leads in the very first episode.

But don’t think that means all the surprises are over. Emma, which some have called the first British detective novel, has a number of tricky moving parts, and attempts to update it have varied widely in terms of success. Perhaps the most successful, and ironically the most faithful adaptation, was also a modern-day alternate universe—a beloved ’90s cult high school classic called Clueless.

What do you think—is Sotomura a match for Alicia Silverstone? Watch the ep and judge for yourself.

Already, fans have reacted with Tumblr GIF sets, roleplaying communities, and more. Speaking about the buildup for the series, co-creator Bernie Su said, “It’s exciting, inspiring, motivating, and at times a bit overwhelming.”

And best of all—it’s only the beginning.