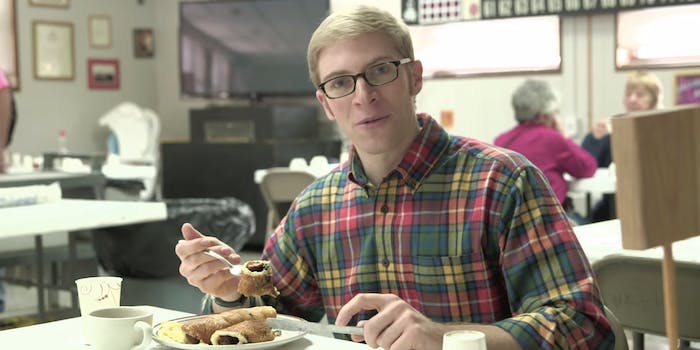 ‘The Pancake Breakfast Critic’ is pretty much our dream job

It’s easy to watch as a simple comedic road trip, but Pera’s creation is so disarmingly strange that it'd be a shame not to look at this series a little bit closer.

Character comedy is always going to split tastes. But if you can’t find anything to smile about in Joe Pera’s gently engaging webseries The Pancake Breakfast Critic, you’ve got a heart of ice.

Pera’s persona trades in an understatement and a mock-nostalgia that frays with his appearance—that of a well-meaning yet repressed Student Body President. His Twitter bio—that people say he reminds them of their grandfather—is brilliantly emblematic of his shtick. He’s kindly, disproportionately interested in the mundane, and when all this spouts from a face that looks like it has never needed a razor, it’s also very funny.

A few videos of Pera’s work have been floating around, seemingly unloved for a while. His Andy Kaufman Award entry from a couple of years back is a perfect introduction to his craft, while his argument that the hopeless Buffalo Bills are the best team in the league—because although come mid-November when they “turn the ball over three times a game,” they do it “to bring families together”—is inspired.

But MTV has been watching and has given him an opportunity to showcase his wares here. The setup is ideal for Pera: Travelling around to review and rate pancake breakfasts presents him with the glut of small-town quirk he needs to power his own eccentricity. But unlike many programs of the genre, this isn’t a stitch-up; its humor is derived from the oddity of Pera’s character rather than the people he talks to.

Nor is it one-dimensional. It was obviously realized early on that it would be difficult for Pera alone to sustain the quality of the first episode throughout the series and that a narrative was required. The introduction of a sidekick, the obnoxious and profane Jeff Katsman, immediately adds an irritant to the star and his show’s tonal palette of fade-outs and panflutes, and in doing so allows us the opportunity to get an understanding of why Pera is as he is. It soon becomes clear that when he is not in control, he is stoic but burns inside.

It’s easy to watch The Pancake Breakfast Critic as a simple comedic road trip, and there’s nothing wrong with that. Indeed there’s certainly plenty of enjoyment to be found in the overall awkwardness and one-liners. But Pera’s creation is so disarmingly strange, and has a demeanor so unthreatening that it might just be a shame not to look at this series a little bit closer.