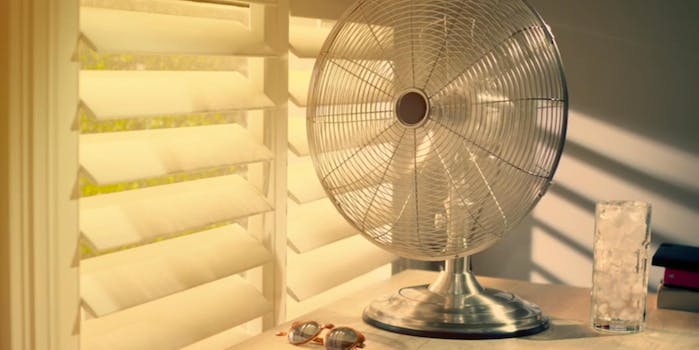 It's basically an updated version of the Brookstone alarm clock your mom bought in 1999.

While checking the charts over at Instantwatcher—an independent site that logs what Netflix and Prime subscribers are watching—Decider’s Meghan O’Keefe noticed something kind of funny this morning: A video called Oscillating Fan for Your Home is beating Making a Murderer, arguably the most talked-about streaming series at the moment, by a wide margin.

The 60-minute video, available to stream on Netflix now, features a silver oscillating desk fan sitting on a lovely wood desk near a window. On the desk are a pair of trendy tortoiseshell sunglasses and a nice, icy glass of water. Outside, you can hear the sounds of the beach.

Early Tuesday, Oscillating Fan reportedly held the spot for sixth most-streamed video overall (with Making a Murderer in 11th place). Since then, Fan has jumped to fifth place.

The popularity makes sense: What the crackling log video does for the Christmas season, Oscillating Fan provides for the rest of the year. Hotel lobby? Throw on some fan. Dermatologist’s waiting room? The fan has you covered. Stoner? Fan.

Between its ocean waves, seagull sounds, and signature fan thrum, it’s basically an updated version of the Brookstone alarm clock your mom bought in 1999.

Plus, as O’Keefe points out, it provides you a full 60 minutes of unlooped soothing footage:

A lot of Yule Log videos make a point of letting you watch the fire burn down to the embers so you know that the film was shot in real time. Over the course of an hour, the ice [in the fan video] melts. That’s how you know the video is real and perhaps it’s that deep-rooted integrity that’s winning over so many fans to the power of the fan.

What’s not to love?