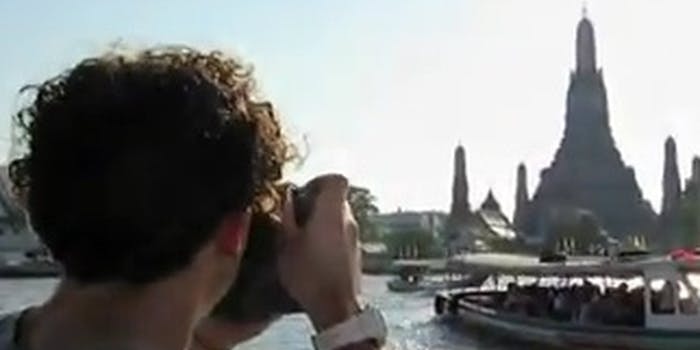 Just do it? Filmmaker creates controversial ad for Nike

If "life is a sport," as Nike claims, filmmaker Casey Neistat plays by his own rules.

He was supposed to be filming an ad for Nike’s new brand FuelBand and its “make it count” campaign, but what he created instead turned out to be an even more appropriate testimonial for the sporting goods company.

Neistat’s adventure, which took him through a whole slew of countries including France, Egypt, Italy, and Thailand, was captured in a near five-minute-long video that is currently making the rounds on the Web.

Neistat and Joseph plunge into cool lagoons, jump off elephants backs, walk with monkeys and visit the shipwrecked Costa Concordia off the coast of Italy. Neistat at one point even gets a tattoo that reads “do more.” It’s a jam-packed vacation-montage video, complete with inspirational quotes from presidents, writers, scientists, historical figures, and beloved actresses.

Neistat also does a lot of running and backflipping throughout the entire vacation.

The Next Web billed Neistat’s act of rebellion as a “troll” attempt. But maybe that’s what Nike wanted all along.

After all, Neistat was just seizing the moment—and the money—in a very “just do it” kind of way.

“The over usage of Helvetica bold,﻿ this dudes ray bans and the fact that he tried to pawn this off as ‘not a nike’ commercial made me fuckin sick,” wrote DUjjainwalla on YouTube.

“to the negative commenters: These guys got WAY more out of life in ten days for less money then﻿ you will sitting in your house making negative comments on other people’s positive videos while your car is in it’s parking spot,” commented rmh31284. “Just sayin….”