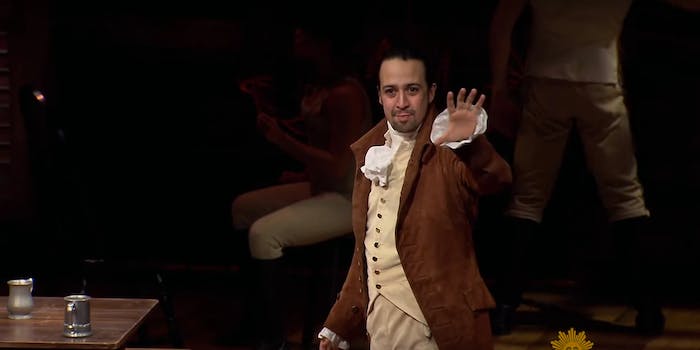 You thought Hamilton was already perfect, but that was before the Notorious B.I.G. references.

What’s the only thing better than Hamilton?

You can now read all about composer Lin Manuel Miranda’s thoughts as well as the actual rap influences behind the duels, love affairs, and turbulence of everyone’s favorite hip-hop musical theater retelling of U.S. history. The recently awarded MacArthur “Genius” has been annotating the lyrics of his own hit musical on the appropriate website Genius, née Rap Genius.

Over the past day, Miranda has dropped a number of choice annotations of his own lyrics on Genius’s Hamilton pages. While the website’s community has already chipped in meaningful explanations and background context for Miranda’s lyrics, the composer himself has been sharing true insights and background context from the making of the show, such as comparing George Washington and Alexander Hamilton to “Lil Wayne and Drake, Dr. Dre and Eminem.”

Here’s Miranda writing about his portrayal of the first U.S. president:

George Washington is just this moral authority. He’s the one that everyone could agree was above reproach. Like regardless of how you felt about America, this was the dude.

So in my head he was like this mix of Common and John Legend and that’s pretty much Chris Jackson — who plays him on Broadway. Just sort of this kind of unimpeachable moral authority.

Miranda discusses the backstories to many of his lyrics, and even includes anecdotes about lyrics that didn’t make it into the final product. He also reveals that a line fans thought was an extra-sly reference to his most famous song from his previous musical, In the Heights, was actually a random weird coincidence.

The best part is that Miranda also includes musical references here and there, so you don’t just get a breakdown of how the centerpiece “Ten Duel Commandments” is a colonial-style beef with pistols, you also get to hear it in context with Notorious B.I.G.’s “Ten Crack Commandments:”

This isn’t the first time Manuel has shared tidbits and scenes from Hamilton on various social platforms—including hand-delivering scenes to the large corner of the fanbase on Tumblr. But it’s the first time the community platform has dovetailed so neatly with the hip-hop culture that inspired Miranda to spend years synthesizing the influences of rap and musical theater.

It’s also probably the first time many Broadway fans have spent this much time on a site better known for its rap references than its Rodgers & Hammerstein. All in all? A pretty good reason for Hamil-fans to be “Satisfied.”