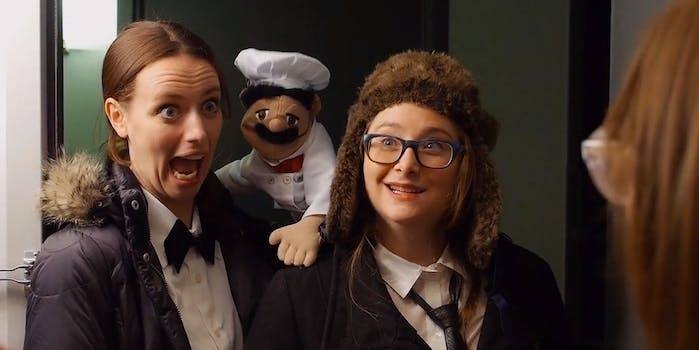 ‘Made to Order’ is the perfect counterpart to ‘High Maintenance’

Food culture is ridiculous, but at least there's 'Made to Order.'

In 2015, food culture has gushed over its tipping point, and the line between satire and reality is dust in the wind. There’s pizza on pizza. Bacon roses exist. This exists. In this climate, thankfully we have Made to Order.

Leah Rudick and Katie Hartman, who make up the NYC sketch duo Skinny Bitch Jesus Meeting, are the creators and writers of the webseries, which follows two sisters attempting to make some scratch by opening a food delivery service. The idea came from a painfully real place: the underground lobster-roll trade in Brooklyn.

“Katie had heard about these underground, secret lobster rolls,” Rudick told the Daily Dot. “But you had to find them secretly on Twitter.”

“It’s like dealing meth,” Rudick said, “but it’s lobster rolls. And it was just one of those things we thought could turn into something cool.”

Some of their other fictional ideas that could kind of sort of maybe be real include sushi for babies and a company called Pussy Cookies. In the first four episodes, which debuted last year, we see the duo brave midnight runs to deliver sandwiches and awkwardly stonewall health inspectors. Hartman said the series “was scripted and we both wanted it to be loose on top of that. We brought in people we love and trust.”

There are shades of High Maintenance, in that the series is less about the product and more about the weirdos Rudick and Hartman meet on their travels. The two have also starred in episodes of the Vimeo series, which is headed to HBO.

“We love them, obviously,” Rudick said of High Maintenance’s crew. “What they’ve done is create a totally new feeling [for] the medium of webseries.”

The focus on personalities is especially ripe in the newly released episode 5, in which the two visit the Williamsburg loft of an insufferable couple (played by Megan Neuringer and Steve O’Brien) to cook them an anniversary dinner.

“That episode could have been 15 minutes long,” Hartman said. “It was heartbreaking to cut some of that down because it was just so funny. … We definitely wanted some tension. We definitely have experience with friends who shouldn’t be dating the people they’re dating. We wrote that character to be kind of cunty, but Megan took it to a whole new level, and the cowardly male figure who chooses insane women… I think that dynamic is infuriating to be around.”

While their misadventures are the focus of Made to Order, our dependency on the on-demand economy is peripherally critiqued. Food culture is post-tipping point because the Internet has allowed for the middle man to be cut loose and commerce to happen between two curious parties, for niche culinary desires to be indulged and profited from.

“I think [that theme is] there without us meaning for it to be,” Hartman said. “It’s in our culture now. We wrote [the series] before Uber was a thing… but now because everyone has a smartphone, because you can just get an app, there’s a race to be the app that will call anything [you] want to [you].”

“Also, there’s just this oversaturation, and the idea that you could get anything at any point,” Rudick said.

“You could also just walk down to a grocery store,” Hartman added.

The shelf life for many of these niche businesses is often mercifully short, as evolution steps in. “In the webseries, it’s such a sinister world of getting into it,” Hartman explained. “People thinking something is such an easy thing and being terrible at it. … In New York, I don’t like frozen yogurt, but there were a bunch of [shops] popping up with dumb names and now they’re all closing. Flavaboom can get out of here.”

“There was a store in L.A. called Plops.” Rudick added. “A store full of cake balls, but it just sounds like a poop store. That store also closed.”

Rudick and Hartman confirm there will be a second season of Made to Order (the remainder of season 1 will roll out over the next few weeks) and that they’re going to get “real artsy” with it. (The name “Burrito Abramović” was also floated.)

A hypothetical question about their last meal before being put to death unraveled this exchange:

Rudick: I was gonna say steak too.

Hartman: We should get executed together.

Rudick: But we should probably just eat one steak. We want to go to skinny heaven. …I don’t want to be too heavy for my coffin.”

Hartman: Maybe some french fries too. … Red wine? Can you have red wine on death row?