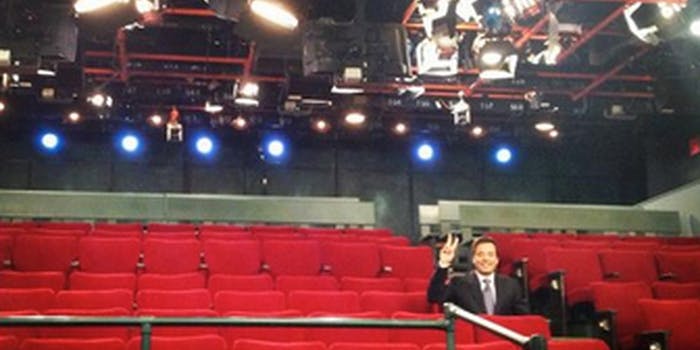 For Letterman and Fallon, the show must go on

The two late night hosts rode out the storm the only way they know how—by going to work.

Hurricane Sandy may have shut down most of New York, but it couldn’t stop David Letterman and Jimmy Fallon.

CBS’ “The Late Show with David Letterman” and NBC’s “Late Night with Jimmy Fallon” both produced original episodes without audiences on their New York-based shows Monday night. The late night stalwarts recorded their programs as Hurricane Sandy  was smashing into the East Coast.

Letterman skipped his usual monologue, instead option to tell jokes from his desk. It made for one of his funniest and most sarcastic shows—far better than you’d expect, considering the situation.

“If I were, I’d be boarding up your television sets, because this is the stuff that’s gonna hurt somebody,” he joked. He renamed his studio the “Ed Sullivan Shelter.”

Letterman’s sole guest was Denzel Washington, who showed up sporting a rain coat and claiming he “swam” to the studios. The show’s signature “Top Ten” list included rejected names for the storm, including The New ‘Hurricane Loco’ from Taco Bell, Wetzilla, and Oprah Windy.

“The creepy silence reminded me﻿ of watching a Leno monologue,” quipped one YouTuber.

An hour later on NBC, Fallon opened his show outside surveying the weather conditions and wishing the audience safe. Equipped with a full band, Fallon chose to do a reduced portion of his monologue to an empty studio.

“I’m assuming that people at home will be watching either on their laptops or they’re getting their generators out and they’re going want to see…I want to leave room to laugh,” said a stir-crazy Fallon, explaining why he was pausing after each joke.

Bravo’s Andy Cohen’s late-night talk show Watch What Happens Live! also produced a new episode Monday night. It featured a pajama-clad Cohen drinking a cocktail (a hurricane) taking viewer calls, clips of upcoming Bravo shows, and live tweets from the hurricane. It was campy, but amusing. The normally chatty host had no guests or audience to play off other than his bartender.

Other shows weren’t as lucky. Comedy Central’s The Daily Show and The Colbert Report both cancelled production. And Jimmy Kimmel, who is taping a week’s worth of shows from Brooklyn, also shut down for the day.

“Though it pains us to do it, JKL from #Brooklyn tonight is cancelled. I’m disappointed too, but we want you to be safe,” tweeted Jimmy Kimmel on Monday.

Kimmel tweeted Tuesday morning, however, that tonight’s show is on “like a fleece jacket on Gov. Chris Christie.”

With November being “sweeps” month (advertising prices are determined depending on the ratings), cancellations are taken deadly serious by executives. There’s no word if other shows will be cancelled Tuesday night.