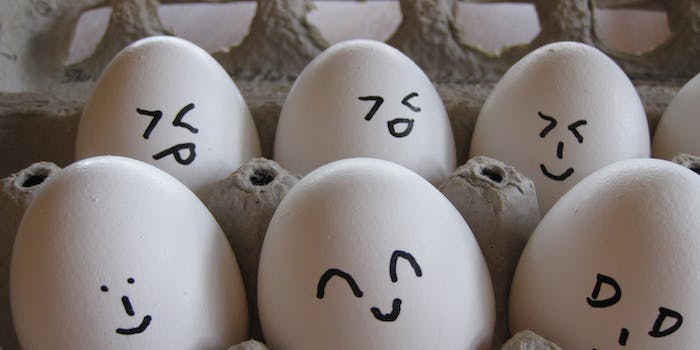 ‘Radiolab’ gets the pitch-perfect parody it deserves

It will crack you up.

Whether you’re a Serial junkie, hooked on This American Life, or addicted to Radiolab, you likely know the hypnotic power of the modern podcast. Anna Rubanova and Siobhan Thompson of the sketch-comedy podcast Left Handed Radio are huge fans of public-radio style podcasts, and they’ve created a hilarious, loving parody of Radiolab’s exploratory narrative style.

The first episode of What If…? asks a perfectly silly, yet plausible question: What if humans laid eggs?

Thompson and Rubanova are perfect as invested but emotionally out-of-touch hosts who probe and interview their subjects with relentless gusto. They spoke to the Daily Dot about their love of public radio, bringing a Radiolab-esque odyssey to life, and plans for future episodes.

What inspired the episode? Are you fans of this style of radio/podcasting?

Siobhan: We loved the very-specific style of pop science and documentary shows on NPR and wanted to find a way to lovingly parody that. I love radio, I grew up in the U.K. where BBC radio is still a huge cultural phenomenon.

Anna: I’m a huge public radio junkie as well. Obviously, the big influence for this was Radiolab but there are many exceptional, sound-rich podcasts being produced these days—99% Invisible, Invisibilia, and The Heart and Criminal are great in particular—but Joe Frank is required listening. I wouldn’t be interested in radio at all if it weren’t for Joe Frank.

How did you create the world of the episode? What was your writing process like?

Siobhan: We wrote the framework which was then improvised by the cast. That makes sense, right?

Anna: Yeah, I think so. Siobhan and I then stuck around to record our dialogues and “deep thoughts,” already knowing what we had in the can. So there was a lot of backwards engineering. I got to “write” while editing as well—adding sound effects that changed the context of the scene. Without the right audience laughter, Dr. Sex sounds like he’s bombing during his standup set.

And everyone sounds like an idiot without the dreamy/precious music underneath their absurd ranting. Speaking of music, Matt Rubano wrote our amazing theme, and our hilarious cast of improv friends—Betsy Kenney, Dru Johnston, Adam Bozarth, and Jon Bershad—made the episode come alive.

Left Handed Radio has been releasing sketch comedy episodes for some time. Any plans for future What If episodes?

Anna: We actually recorded three episodes of What If before Siobhan moved to L.A. The plan was, if people really liked the show, we could find some way of making more. And Left Handed Radio has been churning out audio comedy for half a decade. We may branch out occasionally but always return to the podcast. We’ll keep producing sketches along with occasional themed episodes.

Rubanova and Thompson also co-host Duplicast, an Orphan Black fancast on WNYC. You can find episodes of Left Handed Radio on Soundcloud and iTunes.